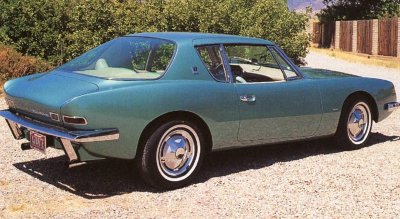 Although he went on to design the Studebaker Avanti, young Raymond Loewy started out designing a rubber-band-powered model airplane in school.

Raymond Fernand Loewy -- designer of the Studebaker Avanti -- was born in Paris on November 5,1893, the youngest of three boys. His father was an Austrian-French journalist. His mother liked to remind her sons: "It's better to be envied than pitied."

One of Loewy's brothers became a surgeon, another a banker. Young Raymond showed a lively interest in motorcars, airplanes, and locomotives, sketching them endlessly in school.

Raymond was also very bright. At the age of only 12, he entered the University of Paris, where he majored in electrical engineering. Three years later, in 1908, he designed a rubber-band-powered model airplane that won a J. Gordon Bennett competition by flying further than all rivals. Still in his teens, Loewy patented this design, manufactured airplane kits, and sold them in France and England.

In 1910, he enrolled in the Ecole de Laneau, hoping to earn an advanced engineering degree. But World War I intervened, and Loewy enlisted in the French army corps of engineers, rising from private to captain by the time he mustered out in 1918.

Loewy later enjoyed telling people that his first uniform was so baggy he couldn't stand to wear it, so he had it tailored to fit like a fine suit. Loewy also decorated his muddy trench with Parisian wallpaper and artwork.

Laying telegraph cable was an early wartime task for Loewy. He ran it night after night from lonely French outposts as far as possible into German territory, usually squirming on his belly while dragging a great spool of wire.

Loewy received the Croix de Guerre with four citations, plus an Inter-Allied medal. Toward the end of the war, he served as a French liaison officer to the U.S. Expeditionary Forces, an assignment that helped him polish his English.

Loewy finished college after the war. Then in 1919, with just $40 and only his blue officer's uniform to wear, he boarded a ship bound for America. His brother, Georges, a doctor and medical researcher in New York, paid his way.

On the way over, someone asked Raymond for a charitable donation; since he had little money, he sketched a portrait of a young lady who was on board and put it up for auction. To his surprise, the drawing brought $150.

The buyer was none other than the British consul in New York, Sir Harry Armstrong, who was so taken with Loewy's charm and talent that he introduced him to Conde Nast, the publisher of Vogue and Vanity Fair magazines.

With that, Loewy began his American career as a fashion illustrator. It wasn't long, however, before he turned to the budding business of industrial design and began landing major clients like Gestetner, Westinghouse, Hupmobile, and Sears-Roebuck. He added Studebaker in 1936, and soon designed its most popular car in years, the 1939 Champion.

By 1953, Raymond Loewy and Associates had grown to a firm with 200 employees, an annual income of over $3 million, a posh New York headquarters, and branch offices in London, Paris, Sao Paolo, Los Angeles, Chicago, and -- just for Studebaker -- South Bend, Indiana.

For more information on Raymond Loewy and the Studebaker Avanti, continue on to the next page.