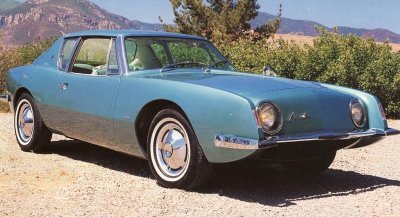 The Studebaker Avanti was the perfect marriage between a designer and a manufacturer. An artistic eye and a flair for salesmanship made Raymond Loewy the most famous industrial designer of his day. None of his was lost on former client Studebaker, which turned to Loewy again in 1961 when a new president decided to add some magic to its lineup with the Studebaker Avanti.

During the 1940s and early 1950s, Studebaker and Raymond Loewy were closely linked in the minds of many Americans, certainly more so than any other car maker and designer. Although Loewy "designed" everything from locomotives to Bulova watches, his Studebakers, particularly the 1947 and 1953 models, made him a household name. Time Magazine even put him on its cover in 1949.

For 1956, Loewy supervised a thorough makeover of the sleek 1953 Studebaker coupe to produce the Hawk line of "family sports cars," then promptly lost his South Bend contract. It may have been just as well, for Studebaker was in dire straits by then, partly from taking over Packard in 1954.

Over the next few years, Studebaker-Packard Corporation changed its management, axed Packard, and narrowly avoided collapse by fielding the popular compact Lark for 1959. Then the Big Three introduced compacts of their own and Studebaker again faced trouble by 1961. Desperate for something new to reinvigorate its lineup and its image, S-P knew to whom it should turn for help: Raymond Loewy.

Remarkably, Loewy was not an auto designer per se. Rather, he excelled as a "front man," a consummate salesman who could sell design ideas to other salesmen. (Indeed, the actual designs of the 1947 and 1953 Studebakers might more accurately be attributed to Virgil Exnei and Robert Bourke, respectively).

Loewy knew which ideas the public would buy. His intuition was so good that in time he became the world's most famous and successful industrial designer, an international icon. Besides the ability to sell his services to hundreds of companies worldwide, Loewy had an unfailing eye for talent. He was also a master at organizing and managing the designers who did the actual work in his name.

To learn about Raymond Loewy's early life, continue on to the next page.