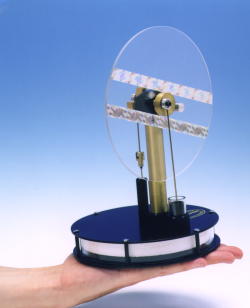 Photo courtesy American Stirling Company This engine can run using only the heat from your hand. See pictures of engines.

The Stirling engine is a heat engine that is vastly different from the internal-combustion engine in your car. Invented by Robert Stirling in 1816, the Stirling engine has the potential to be much more efficient than a gasoline or diesel engine. But today, Stirling engines are used only in some very specialized applications, like in submarines or auxiliary power generators for yachts, where quiet operation is important. Although there hasn't been a successful mass-market application for the Stirling engine, some very high-power inventors are working on it.

A Stirling engine uses the Stirling cycle,­ which is unlike the cycles used in internal-combustion engines.

There are hundreds of ways to put together a Stirling engine. In this article, we'll learn about the Stirling cycle and see how two different configurations of this engine work.

The key principle of a Stirling engine is that a fixed amount of a gas is sealed inside the engine. The Stirling cycle involves a series of events that change the pressure of the gas inside the engine, causing it to do work.

There are several properties of gasses that are critical to the operation of Stirling engines:

Let's go through each part of the Stirling cycle while looking at a simplified Stirling engine. Our simplified engine uses two cylinders. One cylinder is heated by an external heat source (such as fire), and the other is cooled by an external cooling source (such as ice). The gas chambers of the two cylinders are connected, and the pistons are connected to each other mechanically by a linkage that determines how they will move in relation to one another.

There are four parts to the Stirling cycle. The two pistons in the animation above accomplish all of the parts of the cycle:

The Stirling engine only makes power during the first part of the cycle. There are two main ways to increase the power output of a Stirling cycle:

This section described the ideal Stirling cycle. Actual working engines vary the cycle slightly because of the physical limitations of their design. In the next two sections, we'll take a look at a couple of different kinds of Stirling engines. The displacer-type engine is probably the easiest to understand, so we'll start there.

Special thanks to Brent Van Arsdell of American Stirling Company for his help with this article.

Instead of having two pistons, a displacer-type engine has one piston and a displacer. The displacer serves to control when the gas chamber is heated and when it is cooled. This type of Stirling engine is sometimes used in classroom demonstrations. You can even buy a kit to build one yourself!

In the figure on this page, you can see two pistons:

The displacer moves up and down to control whether the gas in the engine is being heated or cooled. There are two positions:

The engine repeatedly heats and cools the gas, extracting energy from the gas's expansion and contraction.

Next, we'll take a look at a two-piston Stirling engine.

In this engine, the heated cylinder is heated by an external flame. The cooled cylinder is air-cooled, and has fins on it to aid in the cooling process. A rod stemming from each piston is connected to a small disc, which is in turn connected to a larger flywheel. This keeps the pistons moving when no power is being generated by the engine.

You might be wondering why there are no mass-market applications of Stirling engines yet. In the next section, we'll take a look at some of the reasons for this.

There are a couple of key characteristics that make Stirling engines impractical for use in many applications, including in most cars and trucks.

Because the heat source is external, it takes a little while for the engine to respond to changes in the amount of heat being applied to the cylinder -- it takes time for the heat to be conducted through the cylinder walls and into the gas inside the engine. This means that:

These shortcomings all but guarantee that it won't replace the internal-combustion engine in cars. However, a Stirling-engine-powered hybrid car might be feasible.

For more information on Stirling engines and related topics, check out the links on the next page.