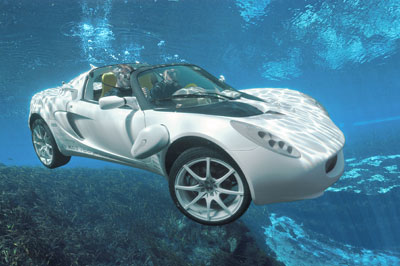 Aquatic cars aren't exactly cutting-edge. After all, in the 1960s, you could actually purchase an amphibious car -- the Quandt Amphicar. So the news that concept car designer Rinspeed would unveil a new aquatic car at the Geneva Motor Show in 2008 didn't seem likely to make a huge splash.

But the sQuba does something a little unusual for a car, even an aquatic car -- it dives underwater and moves around freely like a small submarine. If the thought of cruising around below the waves exploring lake bottoms and visiting marine animals is appealing, imagine doing it in an open-top convertible. That's right, the sQuba's interior and occupants get soaking wet every time they take a submarine spin.

The whole idea seems a little strange, even illogical, until you ponder the logistics of submarine-automobile design. You probably haven't, but visionary car designer Frank M. Rinderknecht thought about it for 30 years, and his James Bond-inspired dream is now a reality. If you've always loved "The Spy Who Loved Me," you'll be pleased to know that the Rinspeed sQuba exists and can successfully navigate underwater environs in its own stately manner. You'd better bring goggles. 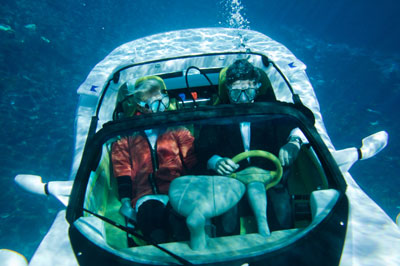 If you've designed a car that will be used to enjoy the marine environment, the last thing you want to do is start messing up that environment. That's one of the reasons the sQuba is a zero-emission vehicle. While it requires five separate motors, all of them are electric. This submarine doesn't directly release any pollution at all.

There's a practical reason for using electric motors as well. Combustion engines are notoriously difficult to operate underwater. An exhaust pipe or tube long enough to stick out of the water would be necessary, and that would severely limit the sQuba's submarine mobility.

Why five motors? One powers the rear wheels when the sQuba is on land. It puts out 54 kilowatts, about 72 horsepower -- enough for a top speed approaching 75 mph. Another motor drives each of the propellers when the sQuba is in the water, pushing the car to a surface speed of about 3 mph (less than 4 knots). Underwater, it only moves about half that fast [source: CNN]. The last two motors are Seabob jet drives which power the steering jets at the sQuba's front. These jets steer the sQuba by directing jets of water through swiveling louvers.

The green aspect doesn't stop at the power plants, however. The sQuba's lights are LEDs, which use less power than conventional lights. And taking the sQuba underwater won't leave a trail of polluting oil behind. The car uses Motorex-developed lubricants, which biodegrade rapidly in water.

Next, we'll find out how a car goes from road to water to underwater.

Rinspeed is a Swiss company that specializes in modifying production cars to create high-performance or novelty versions. They also design concept cars as a way to market themselves and explore new automotive technologies. The company is named after founder Frank M. Rinderknecht, taking the first three letters of his last name [source: Rinspeed]. They began operations in 1977 converting cars to improve handicapped access. Since then, they have created some truly outlandish concept cars, such as the retro-futurist E-Go Rocket, the natural gas/diesel-powered Presto, the Advantige R-One sport scar and the amphibious hydrofoil Splash.

The Logistics of Driving Underwater 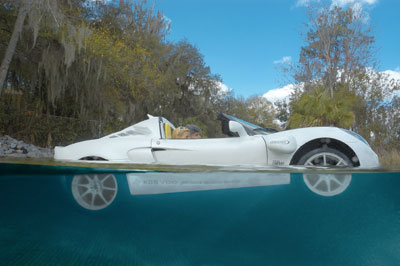 From road to sea: half in, half out.
Photo courtesy of Rinspeed

Getting the sQuba from road to sea is pretty simple. You'd need a boat ramp or a very smooth shoreline -- someplace that would allow the car to drive straight into the water. It's naturally buoyant when the driver's compartment isn't full of water, so initially it will float like a boat. Activating the propellers, which are located on either side of the license plate, provides forward movement.

When you want to go submarine, a few steps need to be taken. The sQuba has two built-in air tanks (one 15-liter, one 18-liter) connected to breathing apparatus typical of scuba gear. Once the mouthpiece is in place, you'll probably want some diving goggles.

Getting underwater is a matter of flooding the driver's compartment by opening slats in the front grill area (this same opening allows cool air to enter while driving on land). This reduces buoyancy and will drop the sQuba down into the water. Depending on the weight of the driver and passenger, it will have approximate neutral buoyancy. That is, it will neither surface nor sink, but float at roughly the same depth. To get even further underwater, the front water jets are activated. They can be controlled by pulling levers on the car's console, and they rotate to direct the sQuba up or down. They can also turn it left or right by firing one side or the other selectively. The jets themselves are large nozzles sticking out of the front fenders.

While underwater, the sQuba's dashboard provides more information than the typical odometer. It will let you know your depth (the maximum dive depth is 10 meters), how much air is left in the tanks and the remaining charge in the lithium-ion batteries that power the three motors.

To surface, the front jets direct the sQuba up. Once at the surface, the driver's compartment is drained and the car once again acts like a boat. It can be driven straight out of the water just as it drove in.

A car that can go underwater can't look like just any sedan on the road. Let's a take a look at some design features.

­Rinderknecht's inspiration for creating the sQuba was the 1977 James Bond film "The Spy Who Loved Me." In the film, Bond faces a villain with a massive ship and sprawling undersea base. Q Branch, the department that provides Bond with his amazing gadgets (and the source of the sQuba's oddly capitalized name), offers up a Lotus Esprit fitted for submarine use which Bond promptly takes for a dive to escape some henchmen. Once in the water, the Esprit's tires retract, it sprouts fins and it zooms quickly to the underwater base.

Several Esprits were used to shoot the scenes, including one that was dropped into the water for the transition shot, and one that was converted for actual (albeit limited) submarine use. Two divers piloted the craft, which only had one gear -- forward. Although it was a hard-top car, the Esprit was not airtight. The driver's compartment was filled with water. A crane was needed to get it in and out of the water [source: QV500.com]. 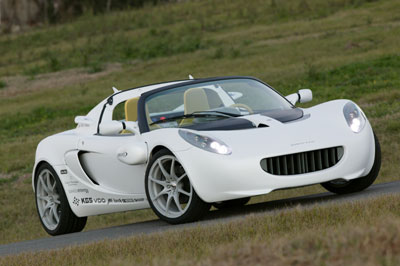 Like all Rinspeed designs, the sQuba wasn't built from scratch. It's actually based on a Lotus Elise sports car, a lightweight, agile car that has a distinctive look. Swiss automotive engineering firm Esoro worked on the design while Hornschuch created visual details such as embossed shark shapes. The rear light assemblies have integrated storage compartments for storing items like a cell phone or wallet.

Rinspeed wasn't content to design the world's first submarine sports car -- the company wanted to push technology even further. To that end, the sQuba utilizes an Ibeo laser-guided autonomous driving system. A laser scanner at the front of the car can follow the road, identify lanes and see obstacles, including humans. The car will drive automatically along a road and stop if someone steps into its path.

If that wasn't enough, the car even has a fancy license plate. Flipping louvers switch the words on the plate from "sQuba" to "ZeroEmission" and back again. Why build a car that goes underwater if you can't have some bling?

So will you be able to test drive a sQuba at your local dealer? Probably not. Rinspeed has no immediate plans to offer production model sQubas. The only existing car cost $1.5 million. However, Rinderknecht can see the sQuba being marketed to the very rich (the Richard Bransons of the world, in other words) at a cost "cheaper than a Rolls-Royce" [source: CNN].

For more information on unusual cars and related stuff, try the next page.

Aquatic Cars of the Past

Perhaps the most famous aquatic car is the Quandt Amphicar, which was sold throughout the mid-1960s. Built in Germany, the Amphicar was capable of cruising on the surface, though it was not a high-performance vehicle. Less than 5,000 were produced, most of them for the U.S. market. About 10 percent of them remain, and they have a dedicated following of Amphicar enthusiasts [source: Amphicars.com].

The first truly high-performance aquatic car was the Gibbs Aquada. Billionaire Richard Branson set a world record for crossing the English Channel in an Aquada in 2005 [source: Associated Content]. The Rinspeed Splash subsequently broke that record.