The sports cars of the 1960s arrived during a turbulent time. American scholars have been dissecting the 1960s almost since the decade ended, and they still debate what happened then and why. But though the analysts may differ in their conclusions, all could agree on one point: The 1960s was an extraordinarily eventful era that profoundly transformed American life.

And the same was true for America's automotive scene. Perhaps the most significant change there was the sharp market growth that occurred once all those "boomers" started buying cars. From a decade low of 5.8 million units in 1961, total U.S. car sales reached an all-time high of nearly 9.4 million in 1969 -- a near 31-percent increase over previous-best 1955. This and changing public tastes prompted U.S. automakers to branch out from traditional "standard" models, first with European-inspired "compacts" for 1960, then somewhat larger "intermediates."

Here are links to individual profiles of the some of the greatest sports cars produced in the 1960s:

By 1962, the richer competitive field had sprouted all manner of specialty models with some of the features and flair of European sports cars. Chevrolet had uncovered the "youth market" car with the bucket-seat Monza version of its rear-engine Corvair compact, but Ford would have the decade's single biggest automotive success. Though the Mustang was basically a humble compact Falcon with a snazzy body, its combination of high style, low price, and numerous options started a buyer stampede to what became known as the "ponycar." 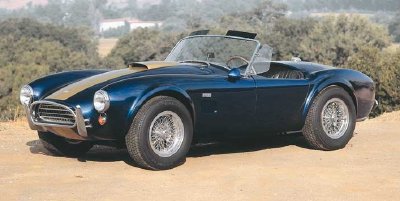 Carroll Shelby combined American engineering and British chassis to make one of the most formidable sports cars of the 1970s: the Shelby Cobra.

In its first 16 months, starting in April 1964, the Mustang attracted nearly 691,000 enthusiastic customers. Once more, rivals rushed to copy a "better idea." By decade's end, some ponycars could also be "muscle cars," the big-engine high-performance breed born at mid-decade with the midsize Pontiac GTO, which quickly inspired its own herd of imitators. U.S. automakers had resumed their Fifties "horsepower war" after a brief ceasefire in the early Sixties, and performance again reigned supreme -- appropriate for the "go-go" era.

Performance also loomed large among genuine sports cars, but so did a greater emphasis on comfort, convenience, and style, a necessity for manufacturers given the U.S. market's ever-growing economic clout. Even at decade's dawn, Americans had rejected a number of small-time 1950s sports cars as well as Detroit decadence.

The import ranks would dwindle further after 1967, when new federal safety and emissions standards began virtually mandating special "U.S. versions" that only the more able, well-financed companies could manage. "Fed regs" also instantly killed off old favorites like the classic Austin-Healey that couldn't meet the new rules without ruinous expense and effort, if then.

Despite that ominous turn, Americans still had plenty of exciting sports cars to choose from, many now coveted collector's items. Jaguar kicked things off in 1961 with the E-Type, as sensational as the XK120 was in its day, maybe more so. The only thing familiar about it was the respected XK twincam six-cylinder engine, and that was improved.

As if in reply, Chevrolet unveiled its own stunner for 1963. Like the E-Type, the Corvette Sting Ray boasted independent rear suspension, reflecting a period sports-car trend, plus styling that rivaled the Jaguar's for pure sex appeal. The replacement 1968 "Shark" was dismissed as just a rebodied Sting Ray with more gadgets but had its own appeal and would prove exceptionally long-lived.

Meanwhile, a wily former racing driver named Carroll Shelby was stuffing potent Ford V8s into British A.C. Ace roadsters to create some of the hairiest production sports cars ever. Shelby loved stark, elemental machines, and his Cobras were precisely that. Engines quickly progressed from 260 to 289 V8s and finally a monster 427 big-block. Acceleration thus ranged from fierce to incredible, but the Cobra also had the stamina to be a world championship racer. Only very expert drivers could tame it, which was the whole point.

Having established itself in the 1950s on both road and track, Ferrari continued offering thoroughbred sports cars in the 1960s, issuing new models most every year. A few quickly became marque icons, particularly the all-conquering 250 GTO and later 365/GTB4 Daytona. Ferrari also explored new territory with the smaller, more affordable V6 Dino, one of the first road cars with the midengine layout that had recently revolutionized open-wheel racing car design.

Maserati hit its stride with a series of conventional but fast and handsome V8-powered grand tourers. And Italian tractor baron Ferruccio Lamborghini began building high-performance sports and GT cars designed by some of the best talent around. His aim was to outdo Ferrari, and in some ways he did. Among the volume Italian marques, Alfa Romeo's successful Giuliettas carried into the Sixties as improved Giulia models. The roadster and a nifty new coupe became perennial America favorites. Even mass-market Fiat, never known for sports cars, entered the fray.

The costly, racing-inspired Mercedes-Benz 300 SL was dropped after 1962 for a smaller sedan-based two-seater that was more tourer than pure sports car, capable though it was. This left Porsche as Germany's premier sports-car builder, and it went from strength to strength. After honing the original 356-series to near-perfection, Porsche introduced the stronger, faster six-cylinder 911, which ultimately proved a car for the ages.

Not surprisingly, Britain still delivered more popularly priced sports cars than any other country, and Americans liked most every one. In this era, British Motor Corporation alone offered the aforementioned "big" Healey, a restyled Austin-Healey Sprite, a new MG Midget companion, even an MGB with -- gasp! -- roll-up windows.

A resurgent Triumph initially countered with its small Spitfire and TR4 roadsters, then followed up a few years on with interesting variations of each. Britain's Rootes Group weighed in with the Alpine, which later got a Ford V8 transplant to become a Tiger. Newcomer Lotus sent over the tiny Elan roadster and a quirky but capable midengine coupe called Europa.

With all this and more, the 1960s were great sports-car years in the U.S., despite the many problems the nation endured. Of course, the fun and excitement wouldn't end when 1970 rolled in, but a new decade would bring historic problems of its own, and the automotive world would never be the same.