The sports cars of the 1940s started innocently enough: just a few score GIs returning from World War II Europe with a foreign sports car in tow. The cars were mostly British and mostly ended up in the ritzier enclaves of the East Coast and California. Not much as invasions go but enough. The sports car had landed, and America would never be the same.

For most Americans in 1945, sports cars seemed as foreign as the people who drove them. Though Detroit had long offered jaunty rumble-seat models and even some snazzy two-seaters, only a small group of Yanks knew much -- or cared -- about the genuine sports cars available from England and Europe.

Not surprisingly, the cognoscenti tended to be well off, well educated, well traveled. They also tended to affect manners that made them "a race apart," as Ken Purdy described them. Purdy first met other U.S. sports-car devotees in the mid-1930s. To him they were a strange, secret society. "They spoke only to each other and in their native tongue," he wrote. " 'I shouldn't turn that much over five-thou, old boy; the big ends simply won't stand up to it.' They treated their mounts like newborn children."

Purdy relates being dumbfounded when he saw one worried owner heat "a gallon and a half of pure castor oil on a portable electric burner. He had a candy thermometer in the reeking stuff and he peered steadily at it. Just as it rose to the temperature he wanted…he snatched the instrument out, grabbed the kettle, and turned to me to say, 'Do stand aside, please; the oil mustn't cool before I get it into the engine.' "

Long enshrined as "the sports car America loved first," the MG seemed an unlikely object of desire in the land of Buck Rogers. Even MG's new TC roadster, introduced in late 1945, was just a mild evolution of the TA/TB design, which dated from 1936 but was conceptually rooted in the Twenties.

Love is one thing, commitment quite another. Although the TC and its cohorts won many American hearts, they didn't attract many U.S. sales. And they never would. Most Americans preferred the cars they already had and were primed for futuristic new models, which had been breathlessly forecast during wartime. Why, they wondered, would any sane person waste money on an old-fashioned thing like an MG?

Why, to make a statement, of course. As David E. Davis opined in 1970, sports-car enthusiasm in late-Forties America was an "easily defined protest movement…[P]eople were sufficiently fed up with the dumb cars coming out of Detroit to express their disgust by buying dumb imported cars…They were a hopelessly outgunned minority in the beginning, but they were a tough breed…driving cars that flew in the face of everything that Detroit, and thus America, stood for." 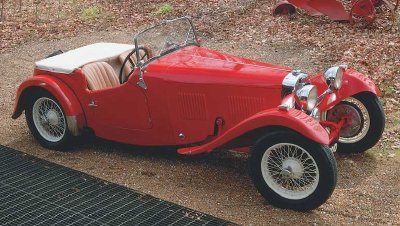 The MG was the first car that captured America's heart, though this did not translate into big sales.

Little by little, sports cars became more common on U.S. roads and public interest grew. Of course, most any new car was of interest right after World War II, because Americans hadn't had any to buy for nearly four years. Domestic automakers mostly satisfied the huge pent-up demand with warmed-over versions of prewar fare, which was enough until about 1950. But most foreign automakers had been ravaged by war and desperately needed to export for dollars.

They, too, resumed production as quickly as possible, but began to realize that sports cars were making an impression in affluent America. Britain's Jaguar was among the first to capitalize on America's burgeoning sports-car "fad." It happened with the 1948 introduction of the all-new XK120, rightly hailed as the state of the sports-car art with its advanced twincam six-cylinder engine and sleek, modern styling.

Meantime, more and more U.S. dealers were starting to take up the sports-car cause. One was Max Hoffman, who bravely opened a toney New York showroom in 1946 to sell pricey French Delahayes, though he soon added more affordable cars, including Jaguars and MGs. Over the next 25 years, Hoffman introduced the U.S. to dozens of other foreign marques and models, notably the VW Beetle and the first Porsches.

In fact, Hoffman did more to grow the U.S. foreign-car market than anyone else except Kjell Qvale, who served the West Coast market from his San Francisco-based British Motor Car Distributors starting in 1947. That same year saw the first issue of a national magazine called Road & Track. Born of the "protest movement" Davis described, R&T also stimulated U.S. interest in foreign cars generally and sports cars in particular.

By the end of the 1940s, sports cars were definitely on the American scene, if not in many Americans' garages. Even Detroit could see something new and maybe important was going on. One can almost hear the boardroom debate: "Hey, maybe we ought to build our own sports car." "Heck, we can't make money with one of those." "Yeah, but it would sure bring in the customers, and that will make money."

The beachhead had been secured for a full-scale assault. Come the Fifties, a battalion of new models would charge into a booming U.S. economy and spread sports-car excitement from sea to shining sea.