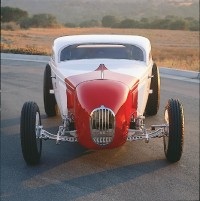 After running a bellytanker and a stream­liner at Bonneville from 1949 to 1951, So-Cal Speed Shop founder Alex Xydias decided to build the So-Cal Coupe, a car he could run at both Bonneville and the dragstrip. A chopped and channeled 1934 Ford coupe that Russell Lanthorne and Jim Gray ran at Bonneville in 1951 fit the bill.

Xydias retained the Frank Kurtis nose, installed a supercharged 1948 Merc flathead, and finished the car to a high standard. The rebuilt coupe debuted in 1953 as part of the So-Cal Speed Shop racing team.

The So-Cal Coupe immediately set records at Bonneville, where it topped 177 mph to set the C Competi­tion Coupe/Sedan mark, and at the dragstrip, turning 121 mph for the NHRA B Modified record.

With its dual racing pedigree, Hot Rod magazine dubbed it the "Double-Threat Coupe" in a May 1954 cover story.

Later in 1954, the coupe ran with an Ardun overhead-valve conversion and an even more radical chop. The first quarter-mile pass with the 460-horsepower engine produced a record 132 mph.

However, tragedy awaited at the next race at Pomona. The clutch blew up at the starting line, setting the car on fire and severely burning driver Dave DeLangton. Dave died a month later.

Xydias gave up racing after the tragedy and sold the car to John Moxley. Moxley ran the car, now called "Miss 400," at Bonneville, setting more records. He sold it to Jerry Eisert in 1956, who raced it until 1960, then put it up on blocks. Jim Travis, a longtime fan of the car, convinced Eisert to sell it to him in 1969.

Dave DeLangton, John Moxley and Jerry Eisert all sat in the driver's seat of the So-Cal Coupe. The car set numerous speed records as one of the most-raced cars in automotive history. See more hot rod pictures.

Travis raced the car at the drags and Bonneville in the early 1970s and continued to race at Bonneville until 1996, which makes it one of the most raced cars in automotive history. Before Travis retired the coupe, he ran 236 mph at Bonneville with a supercharged Chevy engine.

Don Orosco purchased the car from Travis in 1996. Orosco's shop, DBO Motor Racing, restored it to its 1954 configuration (with the Ardun heads) to compete in the Pebble Beach Concours d'Elegance Historic Hot Rod Coupe class in 2001.

There, the coupe faced two cars it had raced against at Bonneville in the 1950s -- Art Chrisman's Model A competition coupe and the Pierson Brothers' 1934 coupe. Still a formidable competitor, the So-Cal Coupe won the class, adding another victory to its storied résumé.