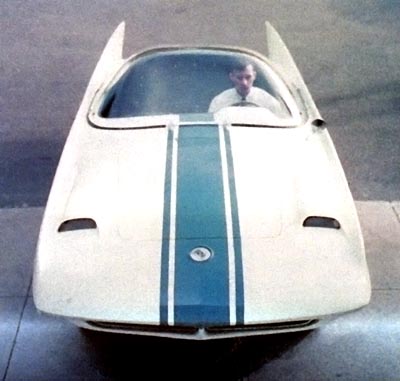 Had Exner not had to ship out to Korea in 1958, he might have added the pop-up headlights he was contemplating to the already Sting Ray-like frontal ensemble.

Virgil Exner, Jr. -- designer of the Simca Special -- was (and probably still is) a "purist" with regard to sports cars. Whenever a car qualified as a sports car, he imposed rigorous restrictions on it.

Among other things, a sports car could not have whitewall tires. Nor could it have a radio. These restrictions extended even to his 1957 Volkswagen, which he entered at the Johnson Park Hillclimb near Grand Rapids, Michigan, in the fall of 1957.

While he served in the U.S. Air Force from 1958 to 1961, Virgil Exner, Jr., had a contract with Ghia to provide a design a month. Several notable designs resulted from this arrangement, including the Fiat 2100 S Sport Coupe, the Selene II show car, the Karmann-Ghia 1500 VW coupe, and the Renault Caravelle.

He continued this arrangement as a partner in his father's design business between 1961 and 1967. While there, he worked on revivals of the Stutz and Duesenberg.

He was a Ford designer from 1967 until his retirement in 1988. Exner worked in Ford's studios in Michigan, Germany, and England on such cars as the 1970 Thunderbird and 1971 Pinto for the domestic market, and the Fiesta, Escort, and Granada for Europe. He now lives in Florida.