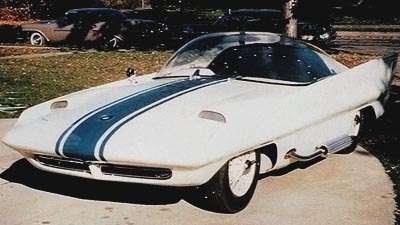 Rod Neubert traded the Simca Special back to Beau Hickory in 1984.

Sometime around 1974, Hickory sold the Simca Special car to a friend: Rod Neubert of Pacifica, who owned it for the next 10 years.

The car underwent changes to the wheels and powertrain during that period. Over the years, the chrome plating on the wire wheels had rusted badly, and Hickory had always thought they seemed aesthetically too light to bear the body's visual mass.

So he and Neubert swapped wheels: The cast wheels of Hickory's Castagna-bodied Fiat went to the Simca; the Davtons -- with fresh paint instead of chrome -- went to the Fiat. Hickory thinks both cars benefited.

Not content with the car's performance, Neubert had a service station in Pacifica install the car's current engine, a 1.4-liter Datsun, with an automatic transmission. The swap never has been quite complete because the engine's downdraft carburetor sits so high that, with the hood closed, it can hardly breathe (Hickory plans to solve this problem with sidedraft carburetion).

As a result of its poor drivability the car sat behind the service station for five or six years. It proceeded to deteriorate there, not only from ocean weather, but at the hands and feet of kids from a nearby school who regularly played in and on it.

The car eventually found its way back to Neubert's garage but lost its spot in 1984 to his wife's new Jaguar. Faced with the prospect of scrapping the car, he traded it back to Hickory, who was moving to Chino Valley, Arizona, at the time.

Luckily, the Exner thesis car has survived some 40 years and several close scrapes with oblivion. It is in need of restoration again, and Hickory says it will get one. He has begun bringing it back to the condition in which it was circa 1966, albeit with the Datsun engine still in place.

In our final section, learn more about Virgil Exner, Jr., and his career since the Simca Special.