The Silver Bullet: Profile of a Hot Rod 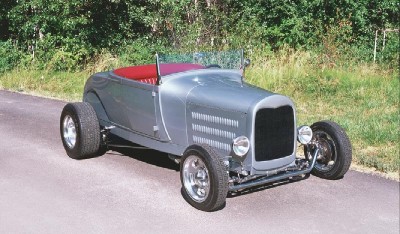 The Silver Bullet hot rod was one of legendary Boyd Coddington's early works. Before Boyd became the biggest name in hot rodding, he was a budding rod builder searching for not only his niche, but his personal style.

Boyd's first hot rods were heavily influenced by the work of "Li'l" John Buttera, a former Funny Car builder who had turned to building hot rods in 1974.

Boyd responded to Buttera's first hot rod, a 1926 T sedan, with a similar '26 T sedan of his own. Buttera followed with a '29 Model A roadster and again Boyd responded in kind, this time with the Silver Bullet '29 roadster shown here.

Although Boyd took many of his cues from Buttera's '29, he began to find his style with the Silver Bullet. Described by Street Rodder as "a striking blend of traditional styling, contemporary rodding, and innovation," the car was a precursor to the beautiful, smooth hot rods that would emerge from Boyd's shop in the future.

From the start of his career, Boyd always had the ability to put the right people in the right position to do the right work. Boyd filled the body's seams and smoothed the fenderwells, then had Buttera fabricate a smooth frame to match the contour of the steel '29 roadster body. Boyd also fashioned the suspension, making an independent rear with a Corvette center section and J&J hub carriers.

With a smooth, yet pleasingly traditional body on fabricated frame rails, Boyd opted for a simple and modern interior. Jim Bailey stitched the burgundy upholstery, Steve Borowitz added a woodgrain insert to the dashboard, and Buttera provided the digital gauges.

For motivation, Boyd installed a Chevy 350 with four Weber carbs. In the interest of reliability, the Webers soon gave way to a single four-barrel carb. A beefed-up PowerGlide routed the power to the rear.­

A Chevy 350 with a single four-barrel carb powers the Silver Bullet hot rod.

The finished car was featured on the cover of the April 1978 Street Rodder, drawing the attention of candymaker Vern Luce. Luce soon hired Boyd to build him a '33 Ford coupe, a job that prompted Boyd to quit his day job as a machinist at Disneyland and open his own shop. Hot rodding would never be the same.

Like any good street rod, the Silver Bullet did some serious road time over the next 20 years until Joe Ditta of Phoenix, Arizona, found it for sale at a swap meet in 1997. Painted black and in need of repair, Joe bought it, and enlisted the help of ­several Phoenix-area craftsmen to return it to its ­former glory. Larry Savi of Westec Customs supervised the restoration, doing justice to the excellent work Boyd and friends did in 1977.