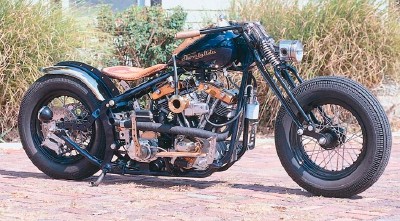 Chopsmiths, an Indiana-based chopper shop, may be a new venture, but judging by this custom-built machine, it will be producing choppers for many years to come. J. L. Hart is the craftsman behind most of the company's creations, and his talent is matched only by his imagination.

Starting with a CMC frame incorporating a triangulated swingarm, both the bottom and rear sections were altered to fit the desired profile. Springer forks, originally from a 1932 Harley-Davidson, were also modified for use on Shovelglide. Fuel and oil tanks were both hand formed by Chopsmiths, as was the rear fender. The headlight was created out of a piston from a John Deere tractor; the taillight came from an early Ford automobile.

The 88-cubic-inch engine was built-up from a variety of parts: Delkron cases, S&S cylinders, and STD heads. Exhaust pipes exit on each side of the bike and are wrapped in protective tape. A modern belt-drive primary is used, but an old-style foot clutch/hand shifter are brought into play to stir the gears.

Go to the next page for more photos and details of the Shovelglide, a truly imaginative chopper. 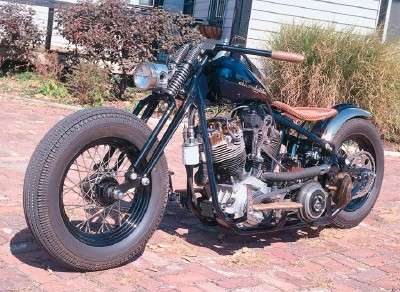 The Shovelglide's hand shifter and foot-operated clutch are throwbacks to yesteryear; the primary belt drive is a modern convenience.

Shovelglide's mixture of new technology, old-school design, hand-formed parts, and artistic imagination is a fitting tribute to its creator.

The engine's valve covers duplicate those of a Harley-Davidson Shovelhead V-twin, but are tinted gold, matching the hand-turned velocity stack on the S&S carburetor.
The Shovelglide chopper's taillight comes from an old Ford automobile.
Perched atop the fuel tank with its Shovelglide logo is the hand-formed oil tank -- tinted gold to match other trim on the bike. The wood handgrips match the wood floorboards, yet another example of this chopper's meticulous detailing.

For more information on custom chopper and motorcycles, see: