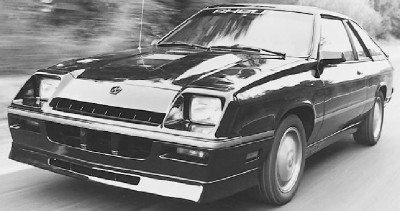 The 1987 Dodge Shelby Charger GLH-S stood for “Goes Like Hell -- Some more,” an upgrade over the original GLH model.

The Mustang experience had soured Shelby on being an auto manufacturer, so he turned to tending his other businesses. Iacocca, meantime, was promoted to Ford Motor Company president in 1970. He continued as such until the summer of '78, when he was abruptly fired by chairman Henry Ford II in a celebrated row that was as personal as it was public. (HFII was reportedly jealous of Iacocca's growing prominence and power in Dearborn). Later that year, Iacocca made his equally celebrated move to the presidency of then-moribund Chrysler Corporation, where he was named board chairman in 1979.

After helping pull Chrysler from the financial brink, Iacocca called on old friend Shelby to add some needed pizzazz to the corporate lineup -- timely, as performance was starting to make a comeback throughout Detroit. Carroll agreed, and Chrysler duly announced his arrival in 1982 as a "performance consultant" who promised to "bring excitement back to the auto industry."

The first fruit of the renewed Shelby/Iacocca partnership was the Chrysler Shelby California Development Center. Set up in Santa Fe Springs, near Los Angeles, CSCDC was assigned to work with Chrysler engineers in exploring new technology for future models and to devise specific performance packages for Chrysler's "excitement" division, Dodge.

With that, March 1, 1986, introduced the first Shelby-marque car since the final Mustang GTs: a quicker, more-powerful GLH called GLH-S ("Goes Like Hell -- Some more"). It had a 2.2-liter (135 cid) turbocharged Chrysler four-cylinder engine that Shelby tweaked to 175 bhp via an air-to-air intercooler, equal-length intake runners, and other alterations. Helped by a mandatory five-speed manual transmission, the GLH-S offered brisk eight-second 0-60 mph performance -- and truly horrendous front-drive torque-steer.

In February 1987, SAI began building a Shelby Lancer based on Dodge's recently launched "H-body" four-door hatchback sedan. Base-priced at $16,995, it also came with a five-speed and the 175-bhp turbo-four, but offered a tamer 146-bhp turbo 2.2 with TorqueFlite automatic for $1000 extra.

The Shelby Lancer took Carroll into a new realm: the high-style European-type sports sedan. Equipment was suitably lavish, with power everything, all-disc brakes (instead of rear drums), and a special Shelby Touring Suspension (good for 0.80g on the skidpad). Handling was sharp and manual-shift acceleration lively -- 7.7 seconds 0-60 mph in most published road tests -- but shift action was clunky, the ride jarring, turbo "lag" annoying, and quietness conspicuously absent.

As ever, though, Shelby wasn't building cars for the masses. After completing 800 Shelby Lancers by July of '87, SAI turned to a similarly modified Dodge Shadow compact called the Shelby CSX. Offered only as a two-door hatchback sedan, it weighed 200 pounds less than the midsize Shelby Lancer and was thus a bit quicker. The factory claimed 0-60 in 7.1 seconds and a standing quarter-mile of 15.1 seconds at 90 mph. Most road tests agreed.

For more on the amazing Shelby cars, old and new, see: