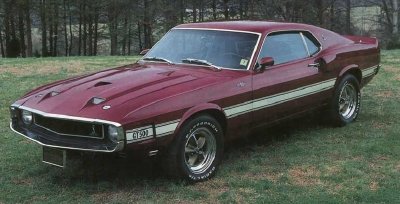 The final run of the Shelby GT-350 and GT-500 line had unique touches in outer styling, but were quite similar to their forefathers inside and under the hood.

There’s little to say about the 1969-70 Shelby GTs, other than that they were even more like production Mustangs than the 1967-68 editions and thus further removed from Carroll Shelby’s original concept. Of course, they’ll always be treasured as the last of a special breed, but that’ll likely be the only reason.

Not that these cars weren’t, er, interesting. Mustang got a much swoopier new bodyshell for ’69, so the Shelbys did too. Both fastback and convertible returned in GT-350 and 500 form, differentiated from the weightier, lengthier, much busier production cars by a three-inch longer hood, reshaped front fenders, and a new nose with a big loop-style bumper/grille (all made of fiberglass to hold down weight), plus a clipped tail still bearing a lip spoiler and Cougar sequential turn signals. Scoops were everywhere -- five NACA ducts on the hood alone -- and wide reflective tape stripes ran midway along the flanks. Said Car and Driver magazine’s Brock Yates: “I personally can’t think of an automobile that makes a statement about performance...any better than [this Shelby].”

But brag is one thing, fact another. And the fact was that stiffening emission controls and the new Mustang’s greater weight made the ’69 Shelbys somewhat tamer. The Shelby GT-500 was no longer labelled “King of the Road” but retained that ’68 model’s 428 Cobra Jet engine, still at a nominal 355 horsepower, though actual output was down 25 horses by most estimates. The Shelby GT-350 was promoted to Ford’s new 351-cubic-inch “Windsor” small-block, with hydraulic-lifter cam, big four-barrel carb, aluminum high-rise manifold, and low-restriction exhaust system. Advertised horsepower was unchanged from that of the previous 302 -- but then, this engine was standard in the new Mach 1 fastback, which cost much less than the Shelby.

Yates derisively described the ’69 Shelby GT-350 as “a garter snake in Cobra skin.” But if the magic was gone -- and it was -- part of the problem was that Ol’ Shel had long ceased to be involved with his cars. In fact, the ’69s were built at Ford’s Southfield, Michigan plant right alongside box-stock Mustangs.

The other part of the problem was new competition from the Mustang line itself. The Mach 1 was interference enough, but mid-year brought the hot Boss 302, a thinly disguised Trans-Am racer for the street, and the incredible Boss 429, a thinly disguised drag racer stuffed full of Ford’s potent “semi-hemi” big-block. Of course, the Bosses were no cheaper or more readily available than the Shelbys, but they were “a curious duplication of effort,” as Yates put it, that only dimmed what luster the Shelbys still had. “The heritage of the GT-350 is performance,” he mused, “and it is difficult to understand why the Ford marketing experts failed to exploit its reputation.”

Perhaps they’d learned Ol’ Shel was tiring of the car business. Ever the individualist, he’d begun by building machines he himself wanted to drive, then watched his Cobras and the original Shelby GT-350 dominate SCCA competition. His efforts with Ford’s assault on the World Manufacturer’s Championship had helped the mid-engine Ford GT racers win Le Mans two years in a row (1966-67) and vanquish Ferraris and Porsches all over the world. But racing was becoming ever-more competitive and costly, and rapidly advancing technology was making it hard for all but a few specialists to apply new engineering principles successfully. By 1970, Shelby had decided that racing wasn’t fun anymore; it was business.

So was building his own cars once Ford muscled in and started calling the shots. And Shelby hated design by committees, where accountants and lawyers often overruled engineers and test drivers. The Bosses and Mach 1 were only last straws.

In a way, time had caught up with both Shelby and his cars. Carroll knew it, and urged Lee Iacocca to end the Shelby-Mustang program after 1970. Iacocca agreed. These final cars were merely leftover ’69s with Boss 302 front spoilers, black hoods, and new serial numbers. At Riverside in October 1969, Shelby announced his retirement as a race-car developer and team manager.

But the last Shelby-Mustangs would not be the last Shelbys. Being who he is, Carroll couldn’t stay away from the car business forever. Today, thanks to his friend Iacocca, he’s working the same kind of magic at Chrysler that he did for Ford, and we enthusiasts are all the better for it.