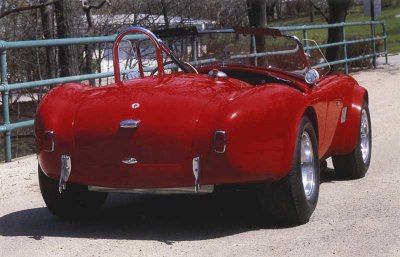 The AC/Shelby-Cobra had been designed so quickly that most of its chassis, suspension, and general structure was a virtual carryover from the last of the British six-cylinder Aces. After only three years, therefore, a much more purpose-built Shelby Cobra, the Mark III, was introduced.

Although the two Mark III models -- 289 and 427 -- looked basically alike, they differed in almost every other respect. The most obvious one was the engine of the new 427 model, named for the cubic-inch displacement of its big-block Ford V-8. In addition, it sported a new chassis, new suspension system, and important changes to the bodyshell. With this brutish engine, the Cobra Mark III was sold only in the U.S. Its European cousin, the AC 289, retained the small-block V-8 of the earlier Mark II Cobra (see Shelby Cobra 260/289 abd AC 289).

Shelby and Ford publicity at the time suggested that this suspension had been computer-generated, but the more prosaic truth is that it was conventionally designed by Bob Negstadt of Shelby-America and Alan Turner of AC. Regardless, the result was more favorable geometry for sharper steering, plus handling that was about as good as this Fifties-vintage chassis could deliver.

With racing in mind -- and following the old American axiom that “there’s no substitute for cubic inches” -- Shelby’s team pursued maximum power by stuffing in the largest V-8 they could. Thus, the small-block 289 V-8 gave way to the massive 427-cid Ford “semi-hemi,” a close relative of the engine used in Ford’s NASCAR racers and modified for the GT40 Mark II and Le Mans-winning Mark IV World Manufacturers Championship cars.

But wait. Although the ultimate Cobra was always known as the “427,” it seems that many of them were actually built with the low-stress low-output 428 engine. So what difference does a cubic inch make? Plenty, for these engines had completely different cylinder dimensions (427 bore/stroke = 4.24 × 3.78 in., 428 = 4.14 × 3.98 in.) and cylinder head castings. In short, the 427 was a racing engine, while the 428 was designed for the big Galaxie and Thunderbird passenger cars -- considerably heavier than the 427 and by no means as “tuneable.”

Though titled the Shelby Cobra 427, these cars were actually built with a 428 engine.

The Cobra 427 body was similar to that of the Mark III AC 289 and included many common sections. However, wider track dimensions and much fatter tires made it necessary to flare the wheelarches considerably, swelling overall width by seven inches compared to the Mark II shell. This and the burly engine made the 427 a muscular monster that looked as aggressive as it sounded and was only slightly slower than an Atlas rocket.

In fact, the 427’s performance was little short of staggering. Even “customer” cars had 390 bhp, while race tuning could provide up to 480 bhp and a pavement-peeling 480 lbs-ft of torque. For its three years of production, the Cobra 427 was undoubtedly the wildest and most exciting machine on American roads. Come to that, it still is.

Alas, sales ran down, so production did too, in 1967. For 1968, the Cobra name (which now belonged to Ford, not Carroll Shelby) began to appear on hopped-up Mustang engines.

In truth, any Cobra, but especially the 427, was too fast for its chassis, and not nearly as refined -- or as reliable -- as it should have been. Yet because of their rarity and shattering performance, Shelby’s high-performance hybrids continued to grow in stature and collectibility as the years passed. Demand quickly outstripped supply, resulting in a slew of Cobra replicas in the Seventies and especially the Eighties. Most employed different and -- believe it or not -- even cruder chassis designs.

Fortunately, the small but persistent demand for real Cobra motoring prompted Brian Angliss and his UK-based Autokraft company to build “Mark IV” Cobras using surviving original tooling purchased from AC, which Autokraft has since acquired. These cars now have Ford’s official sanction, which only goes to show that some legends simply will not be consigned to history.