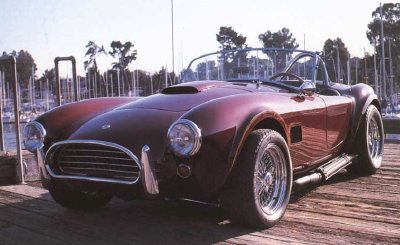 Though the Shelby Cobra’s conception, development, and production history are well known, there’s still a little controversy over the name and the way the cars were built. But there’s no disputing its originator: American Carroll Shelby, the former Ferrari race driver and occasional chicken farmer.

Shelby conceived the idea of shoehorning Ford’s forthcoming new small-block V-8 into the light and lively AC Ace in 1961. The first car was completed in February 1962, and deliveries to American customers began later that same year. This and subsequent Cobra models would be built over just a five-year period, but they were among the most charismatic and fearsome roadgoing sports cars ever produced. The British liked to call them AC Cobras, while Americans preferred Shelby-AC Cobra or plain Shelby-Cobra. Today, they’re remembered mainly -- and vividly -- as Cobra.

That first Shelby Cobra’s basic chassis, suspension, and body design differed little from that of the Ace and Ace-Bristol roadsters that the British firm had been building for some years. As luck would have it, Shelby approached AC about supplying engineless Aces just as Bristol engine supplies began to decline and AC was trying to decide what to do next.

By the time Ace development, such as it was, had been completed, the chassis had been stiffened up a little (much of it shared with late-model Acecas) and a Salisbury final drive (Jaguar E-Type/Mk X type) complete with limited-slip differential had been installed. Cobra styling was almost exactly the same as that of the latter-day Ace, with the final, smaller grille but flared wheelarches to accommodate wider tires.

All Shelby Cobras had four-wheel disc brakes. Inboard rear brakes were contemplated, but production cars had outboard units. The steering box was canted over to clear the Ford engine, but steering and suspension geometry changes were minimal otherwise. Assembly took place in the UK except for engines and gearboxes, which were installed once the cars arrived at Shelby’s small assembly operation in Venice, California.

The engine, of course, was the lightweight, compact thinwall V-8 from Ford’s new 1962 Fairlane intermediate, initially sized at 260 cubic inches and fitted to the first 75 Shelby Cobras built. Mated to it was a 4-speed Borg-Warner all-synchromesh manual transmission. The next 51 cars were equipped with the 289-cid small-block enlargement. Then, as later, the AC chassis really wasn’t rigid enough to handle the engine’s torque, so not all of the Cobra’s wheels stayed on the ground at all times. But this only made an already exciting car even more of a challenge to drive well.

Carroll Shelby imported the dashboard from the AC Ace pretty much intact for the original Cobras.

The next Shelby Cobras, called “Mark II” by AC designers, were built from the beginning of 1963. They retained the original transverse-leaf-spring Ace chassis and the 289 engine but featured rack-and-pinion steering, a definite improvement. Exactly 528 cars were built before the old Ace chassis was discontinued.

Although the original plan called for the Shelby Cobra to be sold only in the U.S., it didn’t last long. The first right-hand-drive cars were completed as early as summer 1963, though it wasn’t until the end of 1964 that AC officially launched the 289 model on the British market. The cars were also sold in Europe.

The original Ace-chassis Cobra ended in early 1965, when production changed over to the truly ferocious Cobra 427, built on a new chassis dubbed “Mark III.” But the small-block Cobra lived on in Europe as a 289 version of the new platform called AC 289. Just 27 were built before all Cobra production ceased in December 1968.