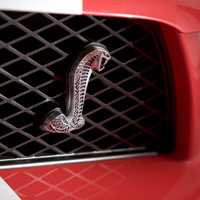 Instead of the standard Mustang horse logo, the GT500 features silver Cobra badges. Still, the GT500 is instantly recognizable as a Mustang, with many elements of the design meant to invoke the original GT500, last produced in 1970, as well as other Shelby Mustangs of the 1960s.

The styling was originally tested on the Mustang GT coupe and refined on the Mustang GT-R before reaching the GT500 stage of design. In the Mustang heritage, vents in the hood draw heat away from the engine compartment, and the rear spoiler is reminiscent of earlier Shelby designs.

Virtually every surface of the interior is covered in black leather, with "SVT red" door panels and seat surfaces. "Leather has long been a performance fashion accessory for enthusiasts, from jackets to racing gloves, so it perfectly matches all the other driving oriented cues," said Keith Rogman, Mustang senior designer.

All the metal parts in the interior have a satin finish, rather than chrome.

The instrument panel reflects the car's breeding as a racecar: The positions of the speedometer and tachometer have been switched so that the tach is more prominent than usual, and a boost gauge allows the driver to keep constant tabs on the status of supercharger.

For more information on the Ford Shelby Cobra GT500 and related topics, check out the links below.

This recent collaboration between Shelby and Mustang is just the latest chapter in a long tradition. The first Shelby Mustang was built in 1964, when Ford decided to add some muscle to the previously mellow Mustang. Shelby Mustangs eventually became a showcase for Ford's technology, winning many races and a few championships on road courses around the world.

Ford's Special Vehicles Team (SVT) started crafting high-performance Mustangs again in the early 1990s after decades without a high-performance flagship for Ford. The Special Vehicles Team was founded in 1991 with the sole purpose of developing a prestige line of high-performance cars and trucks. After unveiling the Mustang GT coupe, the SVT took the basic Mustang structure and built the FR500C specifically for competition in the Grand-Am Cup series. It beat the other production-based cars to win its first ever race in February 2005.