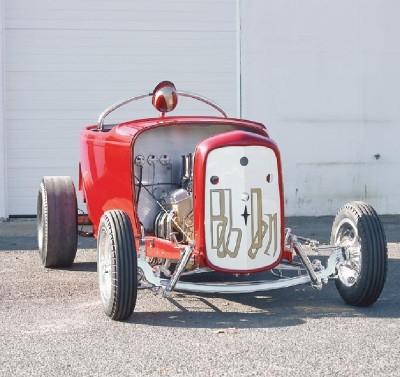 The Roubal Drag Roadster, like many a street roadster hot rod in the 1950s, was subjected to its owner's quest for faster quarter-mile times.

Drag racing, like roadster racing on the dirt before it, turned many fully equipped streeters into bare-bones race cars that were no longer legal to drive on the street. Southern Cali­fornia racers Jerry Norek, Bob Brissette, "Boof" Palmquist, and Tony Nancy piloted such hot rods. Some exceeded 150 mph in the quarter-mile.

This 1932 Ford roadster was first assembled by Bob Roubal of Long Beach, California, in 1956. He stuffed in a 1953 Cadillac 390-cid engine, painted the body candy-apple red and the frame black, then sold it to Bill Deming in 1957, who added the roll bar.

The Roubal Roadster's engine is a Chevy 301-cid small-block.

Deming soon sold the car to Bob Cash, who had Von Dutch paint the grille insert white with gold stylized "Bob + Don" lettering (Don was Cash's brother). Cash, who owned a gas station in Buellton, California, also installed a set of Halibrand wheels (he was a Halibrand dealer) and swapped the Caddy engine for a 301-cid small-block Chevy with four two-barrel carburetors.

In Cash's hands, the roadster set a B/Roadster record of 130 mph at the first Winter­nationals in Pomona, California, in 1961. Cash raced the roadster for close to a decade, until it was made obsolete by lightweight cars with fiberglass bodies and tubular frames.

The Roubal Drag Roadster changed a few more times until 1999, when Ralph Marano of Westfield, New Jersey, bought it. Ralph gave it a new lease on life, restoring it to the guise it wore when Bob Cash raced it. Now, however, the fit and finish far exceeds anything seen at the dragstrip in the 1950s or 1960s.