Rock Hymes wanted to build a unique chopper, but lacked some of the skills and tools required, so he approached Midwest Choppers about doing a cobuild. Rock had been impressed by the machines built by Midwest over the years, and the company was eager to be part of his team. Rock did some of the fabrication himself, drawing on Midwest's expertise when required. The result was Rock Hard.

The radical 51-degree rake joins with forks that are 24 inches over to throw the front end both up and out to nearly unprecedented proportions. Yet despite the extreme numbers, Rock Hard is easily ridden both on the highway and around town.

Power comes courtesy of a 124-cubic-inch S&S engine fitted with Vance & Hines exhaust and Midwest Choppers' trademark Maltese-cross air cleaner. Xtreme Machine rims roll at both ends, the rear being fitted with an

Flame paint jobs are common, but not the type of "real" flame treatment given to Rock Hard. By using less defined edging on the flames, they seem to roll and flow, much like the real thing.

Check out the next page for more photos and details of Rock Hard's bodywork and paint job. 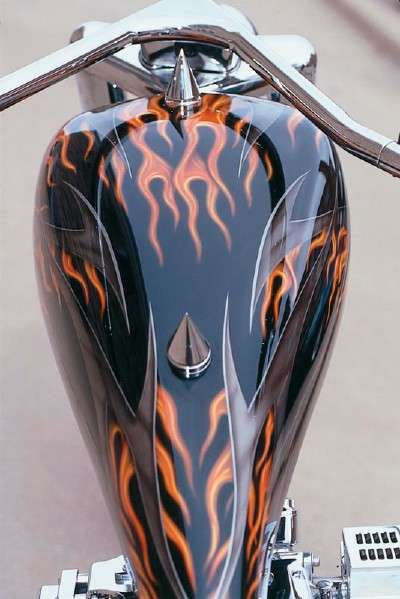 Rock Hard is radical from stem to stern.

Rock Hard is a custom motorcycle with a 124-cubic-inch S&S engine, Vance & Hines exhaust, and a unique "real" flame paint job. See pictures and details of this chopper below.

However, it's the paint and body sculpting that really stand out on Rock Hard.
The flames on Rock Hard have soft, undefined edges, unlike most flame paint jobs.
The flames stand in stark contrast to the sharply defined silver "blades" sharing space on the sculpted sheetmetal.