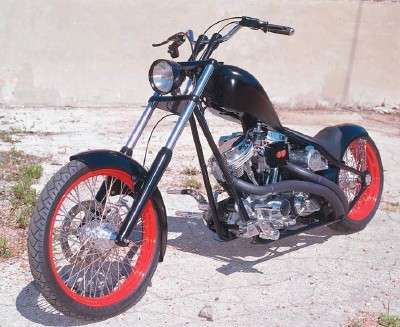 With years of chopper-building experience under its belt, Sound F/X Motorcycle Engineering wanted to try its hand at constructing a bike that wasn't dripping in gleaming lacquer and chrome. And thus began this venture into the Old School formula of design and the creation of the Rigid chopper.

Sound F/X started with a CFL frame from Jesse James' West Coast Choppers, adding 8-inch-over forks from a Harley-Davidson Deuce mounted at a 42-degree rake. Red-rimmed Black Bike spoke wheels hold up each end, the front carrying a Harley disc brake, the rear fitted with a combination disc/sprocket from Exile.

An 80-cubic-inch Harley-Davidson V-twin is fitted with heads and internals from Headquarters. It inhales through an S&S carburetor with Maltese-cross air cleaner, while exhaust is handled by headers from Joker.

Completing the look is pinstriping done in the "Von Dutch" style over semimatte black paint. It all adds up to a fine first effort for a company new to the Old School of thought.

Go to the next page for more close-up pictures of this Harley-Davidson powered chopper, Rigid. 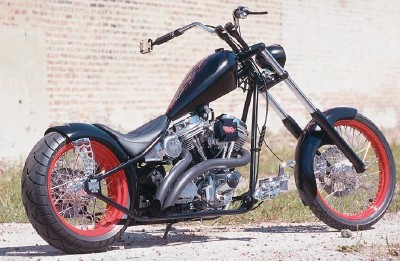 Built by Sound F/X Motorcycle Engineering, Rigid's Old School design is based on a simple black and red color scheme. View more pictures of this Harley-Davidson powered chopper below.

Can Popping a Wheelie Land You in Jail?
What’s the safest type of motorcycle helmet?
10 Vintage Motorcycle Brands