First shown at the Laughlin River Run in 2004, Revenge drew the attention of several major cycle publications. Midwest Choppers built the bike for Scott Rives, and both are pleased with the outcome.

Ten-inch-over inverted forks set at a 46-degree rake combined with a stretched Midwest Choppers frame results in a posture that is anything but subtle. What is subtle, however, are the complex tribal graphics accenting Revenge's Candy Blue paintwork.

Somewhat unusual for a radical chopper is the Harley-Davidson Softail-style triangulated swingarm, which mimics the look of a hardtail frame while affording vastly greater comfort; it pivots at the top, extending a pair of shocks mounted beneath the engine. More common is the potent 124-cubic-inch S&S V-twin fitted with a Martin Bros. exhaust and Midwest Choppers' signature Maltese-cross air cleaner.

Check out the next page for more photos and details of the finely detailed Revenge. 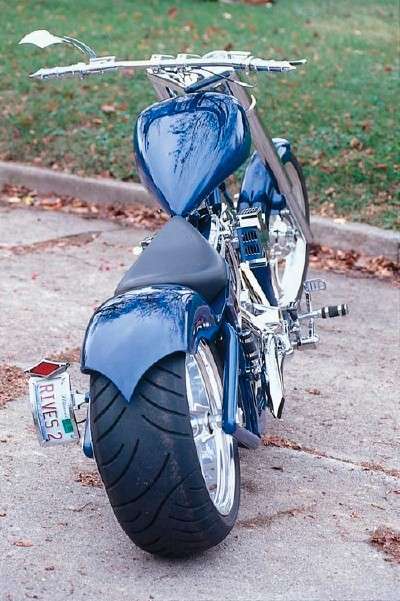 It's difficult to make out the tribal flames accenting Revenge's Candy Blue paint, but that's part of the idea.

Revenge was built by Midwest Choppers in 2004 and features an S&S engine and an unusual triangulated swingarm. See pictures and details of this chopper below.

Subtlety in the paint design lends a touch of elegance to Revenge's clean lines.
The triangulated swingarm hosts an Xtreme Machine wheel fitted with an HHI brake disc mounted inboard of the drive-belt pulley.