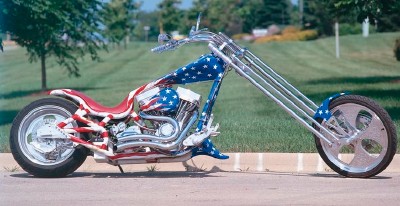 It's an "apparent" fuel tank because the formed metal serves as little more than a broad canvas for applied graphics; in this case, the stars of a "Stars and Stripes" theme. Fuel and oil are carried within the frame tubes.

The 47-degree rake and 18-inch stretch of the springer forks makes for a radical front end. Equally notable is the tail, which incorporates a labyrinth of tubing, but no suspension.

Making this chopper stand out even more is its red, white, and blue paint scheme -- as if this extreme machine needed to attract any more attention....

Go to the next page for more photos and details on this Retro Chopper. 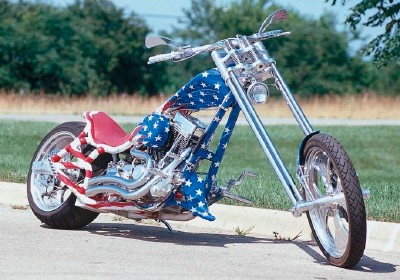 Built by Bourget's Bike Works, the Retro Chopper features a radical design encompassed in a uniquely patriotic theme. Below are more pictures and descriptions of this one-of-a-kind chopper.

Formed sheetmetal blends into the tubes.

What looks like a fuel tank is formed sheetmetal that has been blended into the frame tubes; gas and oil are held in the frame.

A machined piece acts as a brake mount.

Multitude of short tubes make up the rear of the frame. Holding the axle is a machined piece that also serves as a mount for the brake caliper.