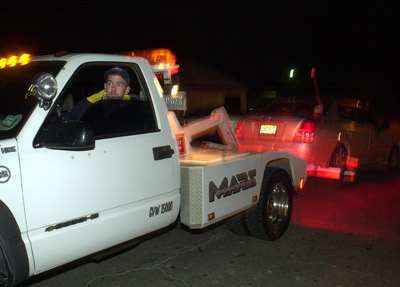 It's the repo man's job to find and retrieve vehicles when the owner stops making payments.
William Thomas Cain/Getty Images

When someone buys a new car, truck or boat, they usually don't have the cash to pay for the whole thing all at once. Often, they'll finance the purchase -- work out a deal with a bank or other lender to borrow enough money to make the purchase -- then make monthly payments and pay interest. Until the final payment is made, the lender will hold a lien against the vehicle. The lien is a legal concept which gives the lender the right to take possession of the vehicle if certain conditions aren't met, such as making the monthly payments.

If the borrower starts falling behind on a loan, the lender will make an effort to contact the person and resolve the issue, possibly with an alternate payment plan. If the loan reaches a certain state of delinquency, usually between 30 and 90 days past due, the lender realizes they're probably not going to make any more money on the deal. Their only choice is to take possession of the vehicle and sell it at an auction. This is a last resort because the vehicle is now used, the value has gone down and the repossession itself costs money.

That's where the repo man comes in. Lenders hire repo men to find and retrieve these vehicles. The repo man might earn a set fee per repo, though the fee may vary based on the vehicle being recovered, the location and the amount of work required to find it. People who stop paying their car loans don't always wait at home for the repo man to show up. Often they move without notifying the lender of the change of address, hoping to elude their debts. This is known as a "skip," and the job of tracking them down, known as skip tracing, falls to the repo man as well. A repo man can probably make as much as a few hundred dollars per recovery, although for larger jobs, such as boats or heavy equipment, the cost may be based on the weight of the item being repossessed.

It's possible to make a living by getting a few hundred bucks for a quick stealth tow, but repossession agents face many challenges. For one thing, repossession is not as simple as finding a car and towing it away. In the United States, each state has laws that cover repossession practices. There are licensing requirements and insurance costs to deal with. If a repo agent works in multiple states, he or she will have to navigate the tangled web of statutes in each state.

The repo agent makes certain the client has a lien against the vehicle, giving them the right to take possession. Once the repo man locates the vehicle, he or she checks the vehicle identification number, or VIN, to be absolutely sure it's the correct car or truck.

Once the repo is complete, the vehicle must be towed somewhere secure. Most towing companies have their own storage lots where they can bring cars, trucks, motorcycles or even boats, but sometimes they can deliver the vehicle directly to the client. The repo man also has to notify the local police that repossession took place. That way, if the former owner calls the police to report a stolen vehicle, the police can explain what happened.

Legal hassles are one thing, but we haven't even started talking about the dangers a repo man faces on the job. On the next page, we'll find out why repo men need to be so stealthy.

What do you do when you need to repo a boat, a motor home, or even construction equipment? Specialized towing companies have ways to deal with these difficult repos, but there's really no way to do them in a stealthy way. If something like a trailer is being repossessed, it can be towed away using a regular hitch, or even a flatbed truck. On the other hand, something the size of a motor home requires a heavy-duty tow truck, which is not at all stealthy. Really huge repo items might require a massive boom arm or a strong winch and maybe even a semi truck to haul the item away. The only "stealth" option in this case is to try to make the repo when the owner will be away from home or job site for a few hours. In most cases, the repossession agent will contact the owner and explain the situation ahead of time to attempt to work out a way to bring the repo off smoothly.