Inside a Rearview Camera System

We started by briefly describing the full-view camera in the Infiniti EX35, so let's take a closer look at it. If you understand Infiniti's system, you should have a good idea of how similar technologies across various manufacturers operate.

First off, rearview cameras actually capture images that are the opposite of what you really see on the display. What you see is a mirrored image with the video feed reversed so you have the proper orientation when you look at the LCD display. If you were to back up your vehicle based on the raw images from a rearview camera, you would mistakenly turn left to avoid an obstacle on the right side. 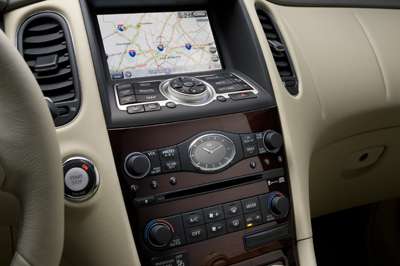 Photo courtesy Nissan
The interior of the 2008 Infiniti EX

As mentioned earlier, the Infiniti uses four tiny cameras with fish-eye (or wide-angle) lenses. These devices are placed on all four sides of the car: One sits above the left side of the license plate, another inside the Infiniti logo on the front grill and the remaining two fit beneath each side mirror. The cameras record raw digital footage, and software electronically straightens the images through electronic interpolation or pixel enhancement. In the EX35, the result is a real-time overhead (or bird's-eye) view of the vehicle.

Cameras like the Infiniti's use fish-eye lenses because they can capture a wider field of view at a much closer proximity. The problems associated with fish-eye lenses are the characteristic bending or image distortion due to the curvature of the lens. Fortunately, CCD sensors create high-quality images, and digital-imaging software can manipulate and flip the images, so that what drivers see is a perfectly clear picture. To learn more about how CCD sensors transform what the camera sees into digitally displayed images, read How Digital Cameras Work. 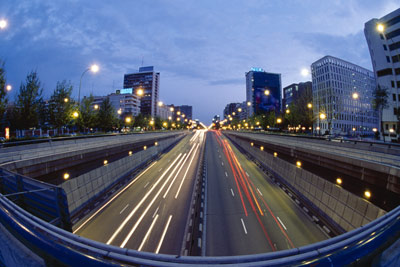 Grant V. Faint/Getty Images
This image typifies what a rearview camera with a fish-eye lens might capture before the image distortion is corrected.

The majority of rearview cameras found on vehicles today are hardwired systems powered by the car's battery, and digital images travel through the cables to the LCD display. Virtually all rearview cameras and screens activate when the driver puts the car in reverse.

One of the coolest rearview cameras can be found in several Toyota models, including the 4Runner. Instead of using a large LCD screen in or around the dashboard, a small display is mounted in the rearview mirror itself and activates either when the vehicle is placed in reverse or when the driver turns it on manually. Cameras in vehicles with only a rearview system are typically located somewhere near the license plate.

Again, factory-installed rearview camera systems are hardwired and reliable, but not every one operates the same. Some aftermarket systems are wireless and can be installed quickly by you or an experienced installer. In the next section, we'll look at aftermarket rearview cameras and get an idea of what you could expect to pay for a decent one.