Demand for the Rearview Camera

Rearview cameras are like having eyes in the back of your head. These small devices, usually the size of a nickel, are mounted on the exterior of a vehicle and provide real-time video pictures of whatever is happening outside your car. Some rearview camera systems incorporate backup sensors, which aid in drivers' awareness of objects behind their vehicle.

Engineers designed the first rearview cameras to fight blind spots. As far back as the late 1970s, large construction vehicles such as dump trucks and heavy mining equipment including dozers and scrapers began placing cameras on the back of the equipment to help operators with rear vision. Because the tractors and dump trucks used on strip mines are so large, and the mines themselves are so vast of a work area, rear visibility is limited, so operators couldn't see behind them when they needed to back up. This was especially true for the dump trucks and large bulldozers, as they frequently needed to reverse direction during a typical work day. To combat the lack of rear visibility, mechanics installed tiny cameras and connected them to a small monitor. Since some of the vehicles used on strip mines had no rear visibility, the makeshift cameras proved a valuable safety measure. 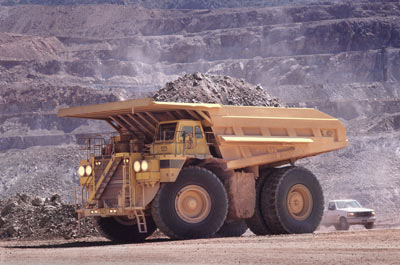 Lester Lefkowitz/Getty Images
If that giant dump truck in the mining facility doesn't have a rearview camera, that little truck behind it is in trouble.

As the need to improve safety in the mining industry grew and more contractors began retrofitting aftermarket camera systems, companies like Caterpillar responded. The WAVS onboard rearview camera system found on Caterpillar tractors and off-highway trucks offers one or two cameras used for rear viewing. Take a 797B mining truck. Measuring 21.5 feet (6.5 meters) tall, 47 feet (14.3 meters) long and 32 feet (9.7 meters) wide, it would be virtually impossible to see a small pickup directly behind the vehicle. As a result, Caterpillar employs the single- or dual-camera system in place of a rearview mirror, which isn't feasible in such a large vehicle. These trucks have dump beds blocking all rear visibility, much as a camper shell obstructs the rear view in a pickup truck.

Auto manufacturers have followed the lead of construction and mining equipment companies and now offer rearview cameras similar to the one seen on the Infiniti EX35. While Infiniti's AVM system boasts a 360-degree view, most rearview cameras found in the auto industry display only what's behind the vehicle. Just about every manufacturer, from Lexus to Chevrolet to Dodge with the iconic Caravan, offers a rearview camera system on one or more of their vehicles.

Several other safety features complement rearview cameras, such as backup sensors, which sound off with proximity alarms. Have you ever been sitting at home and heard a truck beeping as it backed up? Those are backup alarms alerting people outside the vehicle. Similar technology has made its way into the cars we drive, and rearview cameras look to be gaining in popularity, especially as vehicles grow larger. Read on to learn more about Infiniti's 360-degree camera system and how the cameras on other vehicles produce the images we see in the car.