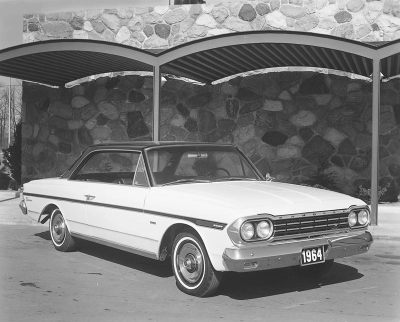 Richard A. Teague had joined the AMC styling staff by this time and would soon succeed Ed Anderson. But it was Anderson who shaped the Classic that was named Motor Trend magazine's 1963 "Car of the Year."

They also went better thanks to a new 287-cid version of the familiar 327-cid V-8. Rated at 198 bhp, the 287 would remain through 1966. V-8 Classics combined good go with good mileage; even with "Flash-O-Matic" they could run 0-60 mph in about 10 seconds and return 16-20 mpg. Of course, the V-8s weighed more than six-cylinder Ramblers, so understeer was ­pronounced.

Hardtops comprised the bench-seat 770 and bucket-seat Typhoon. The latter introduced a new short-stroke 232-cid "Typhoon" six (later "Torque Command") that began replacing the old 195.6-cid unit throughout the AMC line. Arriving with 145 bhp, the 232 spawned a destroked 128-bhp 199-cid version for '65-model 550s. The Typhoon itself was a year-only limited edition (2520 built) offering a black vinyl roof, Solar Yellow paint, and a sporty all-vinyl interior for $2509.

A new Classic implied a new Ambassador, but the '63 again shared Classic's wheelbase and styling (save the usual extra chrome bits). Series were retitled 800, 880, and 990, each with the previous three body styles. 800s were a tough sell and vanished for '64. So did 880s, leaving just 990s in four-door sedan and wagon body styles, plus a new hardtop coupe with altered styling a la Classic. Also listed was a sporty bucket-seat 990H hardtop with a standard 270-bhp 327 V-8.

Teague succeeded Anderson as AMC design chief on the strength of his pretty 1964 American. Ironically, this was a clever adaptation of Anderson's Classic, with Unisides shortened ahead of the cowl to give a 106-inch wheelbase. But that was still half a foot longer than American's previous span, and Teague used it to produce a well-proportioned compact with only modest brightwork. This styling was good enough to continue with only minor yearly changes through 1969 and the end of the Rambler marque.