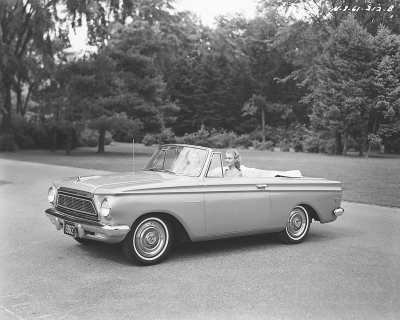 The 1962 Rambler American 400 convertible coupe was an upscaled, posh model.

In all, AMC's 1957-59 sales performance was a remarkable comeback from nail-biting 1954-56. And the good times kept on rolling. For 1960, Rambler recorded about 450,000 sales -- the highest annual output ever tallied by an independent manufacturer. Rambler ranked third in the 1961 production race despite volume that was 17 percent lower.

Though production for 1962 increased substantially, Rambler ran fifth that year as Pontiac and Olds swept by. The following year found Rambler dropping to eighth place. Output continued to be healthy, yet Rambler/AMC kept slipping: down to ninth for '65 and tenth by 1968.

Two management changes greatly affected Rambler in this period. First, the hard-driving George Romney left in 1962 to make his successful run for the Michigan statehouse. His successor, the ebullient Roy Abernethy, was far less loyal to sensible economy cars, and began an ambitious model expansion that ultimately proved misguided.

Abernethy stepped aside in 1966 for Roy D. Chapin, Jr., who became board chairman the following year, with William V. Luneberg as president. This team ordered further diversification, including new "make models" like the 1968 Javelin "ponycar." They also killed the Rambler name after the final Americans of 1969. That was probably wise because by that time, Rambler's sensible image had become more of a liability than an asset.

The compact American returned for 1960 with no fundamental change, but new Super and Custom four-door sedans helped lift model-year volume to 120,600. Though prices were slightly higher at $1781-$2235, the American remained one of the country's most-affordable cars. It also remained an anachronism with its '50s "Farina" styling and elderly L-head six. But sales were more than healthy enough to justify a full restyle for 1961.

Ambassadors also sported a "Scena-Ramic" windshield curved at the top as well as the sides. A three-seat wagon with a novel left-hinged swing-out tailgate was added to all three series. These changes were evidently well-considered, for AMC passed the billion-dollar mark in net sales for the first time and earned a $48-million profit.

The rebodied 1961 American was a rather odd bit of work by AMC chief designer Edmund A. Anderson (a veteran of Nash days). Boxy and truncated, it was three inches narrower and 5.2 inches shorter than the old '55-vintage design. Happily, the ancient six was modernized with an overhead-valve cylinder head (actually a mid-1960 change), which boosted optional bhp to 127. Existing body styles plus a new convertible and four-door wagons were sprinkled among the usual trims.

Posh "400" models were added for '62, and Custom moved down to displace Super. Series were retitled for '63 -- low-end 220, midpriced 330, and top-end 440 -- and hardtop coupes arrived, the last a bench-seat 440 and bucket-seat 440H. Styling changed only in detail each year. Though true economy cars with fair interior space, the 1961-63 Americans were hardly beautiful.

The Six/Rebel became Rambler's Classic for '61, announced by headlights moved into a checkerboard grille beneath a lower hood. V-8s departed for '62, but two-door sedans debuted, and all models wore a more involved grille and finless rear fenders. An interesting '62 Classic option (shared with American) was "E-Stick," a manual transmission with "automatic" clutch. Though it cost just $60, it was too complex to sell really well.

Ambassador, meantime, underwent a big change. The '61s carried a dubious facelift with pointy front-fender bottoms, heavily hooded headlamps, and a raked inverted-trapezoid grille. Hardtop sedans and wagons were axed. Returning from 1960 as base power was a two-barrel 250-bhp "economy" version of the 327 V-8; the 270-bhp engine was now optional. The '62 models effectively replaced Classic V-8s, and were demoted to the same 108-inch platform and given near-identical styling.