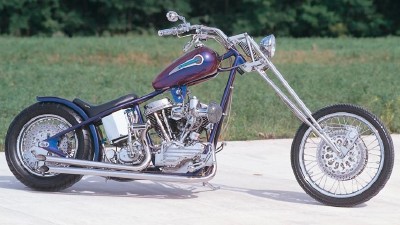 Though first purchased by Michael Bailey in 1974, it was more than 20 years before his 1955 Harley-Davidson would get the chopper treatment. Instead of hiring the work out, he took on the task himself -- which resulted in a two-year build time for the Purple Haze chopper.

A stretched Atlas hardtail frame was substituted for the original, providing a leaner look and more-radical profile. Girder forks replaced the heavy Hydra-Glide telescopics, and modern wheels and brakes were fitted at each end.

Displacement of the original Panhead V-twin remains at 74 cubic inches, but many parts have been replaced with modern, high-performance substitutes. The "Who's Who" list of internal hardware includes a Sifton cam, STD heads, S&S crank, and Wiseco pistons. A single SU carburetor tends the fuel mixture, which is lit by a Mallory ignition.

To complete his first project bike, Michael applied blue-to-red chameleon paint to every square inch of steel. A Harley-Davidson logo dresses the fuel tank, and a layer of chrome dresses the oil tank and forks. It may have taken two decades for Michael to convert his old Harley into a stunning chopper, but judging from the outcome, it was worth the wait.

Go to the next page for more details and pictures of this Harley-Davidson-powered chopper, the Purple Haze. 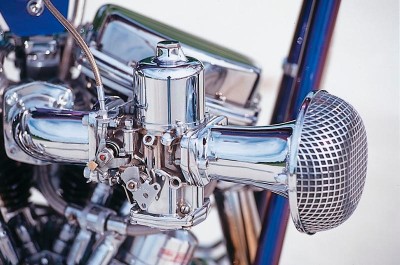 It may look like an old Panhead, and it may still displace 74 cubic inches, but the Purple Haze's engine is loaded with high-performance hardware.

Purple Haze was originally a 1955 Harley-Davidson before owner Michael Bailey gave it the chopper treatment. See pictures and details of this powerful machine below.

Behind the Scenes at Supercross
Do loud pipes really save lives?
What should be in your motorcycle tool bag?