How did the prop-driven car gain traction? 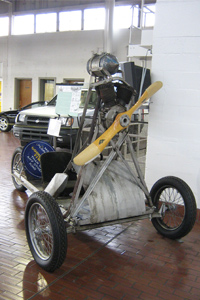 Marcel Leyat, the French engineer, developed the Helica, which achieved a reputation as one of the most prominent prop-driven cars of the day. The prototype was completed in 1913, and Leyat began selling it in 1919, with a production run of just six cars over two years. Leyat built other prop-driven models until 1926, for a total of about 25 to 30 cars. The Lane Motor Museum in Nashville counts a Helica replica among its collection. It employs an 18-horsepower Harley-Davidson engine (though a 1922 Helica advertisement refers to an 8-horsepower, V-twin, Anzani motor).

The Helicron, another French model, is a rare case of a gem actually found in a barn. Some point after its 1932 debut, the Helicron was stored in France, to be rediscovered in 2000. The Lane Motor Museum's professional restoration makes this one-off car a great example for studying their general design.

On different models, the propeller's mount varies from front and back, but both designs have disadvantages. A front-mounted prop will create considerable discomfort for the car's occupants from wind resistance and airborne objects, while the rear option is only efficient on a tapered body profile. The Helicron's propeller was front mounted and the car was steered by the rear wheels, which resulted in some control issues. The open cockpit might be a bit startling (after all, the car was notoriously difficult to control and capable of notably high speeds), but it was typical of aircraft and even other automobiles of the time.

Compared to modern safety standards, it might be a surprise that the Helicron, and prop-driven cars of similar design, were allowed on open roads. The sleek wooden craftsmanship offers some semblance of solidity, but according to the Lane Motor Museum, the Helicron's weight is only 1,000 pounds (453.6 kilograms) (the Leyat Helica, constructed mostly of aluminum, weighed in nearly 400 pounds (181.4 kilograms) less; for comparison, a VW Rabbit weighs about 1,700 pounds (771.1 kilograms).

Designed with an ABC Scorpion engine, the Helicron is currently powered by a Citroen GS 1.3 liter powerplant that achieves a cruise of 30 to 40 miles per hour (48.3 to 64.4 kilometers per hour). The Helicron is kept in good condition for the driving enjoyment of the museum's administrators, and often makes appearances at vintage car shows and Concours events. According to the 1912 New York Times, the ride was surprisingly smooth and "gondola-like."

Up next, we'll discuss what became of these soon-to-be-legendary vehicles.