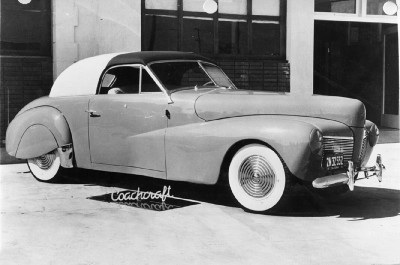 Though the scene was still in its infancy, the custom car aesthetic had pretty much been established by 1940. For pre-1949 customs, long and low was the way to go.

Conventions such as shaved noses, decks, and door handles; chopped tops; and lowered stances were already well-established. Carson tops and DuVall windshields had been developed in the mid 1930s. While 1936 Fords were early customizing favorites, 1938-1940 Fords and Mercurys, and early 1940s Chevys proved popular, too.

Coachbuilders such as Coachcraft, Bob Lee Cadillac, and Bohman & Schwarz were performing high-end work on expensive cars, but it was the smaller outfits run by the likes of Jimmy Summers and Roy Hagy in Los Angeles and Harry Westergard in Sacramento that performed the kind of work that the custom community would embrace.

Early custom fans emerged from the rebellious young hot rod crowd. They didn't have the money to buy Buicks, Cadillacs, Lincolns, and Packards -- or to pay expensive coachbuilders -- but they wanted their cars to share the look of coachbuilt cars or high-dollar stock automobiles.

Westergard is widely recognized as the father of the early custom look, which usually involved a 1936 Ford coupe with a chopped top, upright LaSalle grille, solid hood sides, a recessed license plate, rear fender skirts, and Chevy headlights molded into the fenders.

Westergard is also often ­credited with originating pushbutton doors that utilized solenoids to open electrically and allow for the removal of the door handles.

A car crazy kid in Sacramento named George Barris worked for Westergard in the late 1930s, then moved to Southern California in the early 1940s and brought with him many of Westergard's tricks. Barris opened his own shop during the war, performing custom work.

His brother Sam joined him after the war, and together the two took off, inventing new techniques, perfecting old ones, and giving each car its own character. Others were part of the wave, too, including Al and Gil Ayala, Neil Emory and Clayton Jensen of Valley Custom, and Joe Bailon.

Much of the long, low look customizers were trying to achieve during the 1940s was made easier with the release of full-envelope-bodied cars starting in 1948 and ­culminating with the 1949 Mercury. In fact, customizing 1949 Mercs would make the custom scene more popular than ever.