How the Porsche Carrera GT Works

Any car can take you from one place to another. But not many can go from zero to 60 miles per hour (97 kph) in just over three seconds or hit a top speed of 205 mph (330 kph). And not many cars feel as at home on the racetrack as they do on the roadway. The V10, 605-horsepower Porsche Carrera GT achieves all of the above.

The Carrera GT is among a rare breed of supercars -- exotic, high-performance automobiles that are built for ultimate speed and handling on the road. Its ultra-lightweight, high-tech design places the Carrera GT among the top of its class.

In this article, we'll find out how the Porsche Carrera GT was born and see what makes it a true supercar. 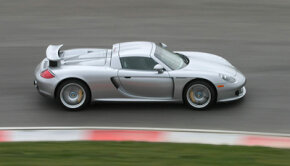 In June 1998, Porsche designers came up with the idea of creating a high-performance racecar designed specifically for the 24 Hours of Le Mans, which a Porsche had won that year. But due to rising costs and concerns over its high-powered competitor, the Enzo Ferrari, Porsche scrapped its plans for a racecar. Instead, the company created a supercar that was engineered for the track but designed for the road.

The Carrera GT was finally unveiled at the 2003 Geneva Auto Show. It was the first limited-production supercar Porsche had introduced since unveiling the 959 in 1983.

Proving that you don't mess with a good thing, Porsche updated its 2005 Carrera GT only slightly. The company mounted a glass screen between the safety bars, added a seat-height adjustment and made a few other minor changes. But otherwise, the 2005 Carrera GT remains the same the original 2003 model.

How Does the Carrera GT Stack Up? 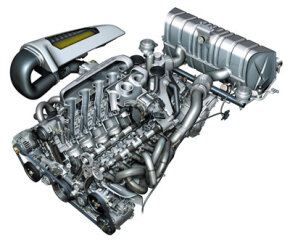 As with most high-performance cars, the Carrera's designers chose a mid-engine design, placing the engine behind the cockpit to achieve a weight distribution that makes the car extremely aerodynamic. Its location gives the car a low center of gravity, which enables the Carrera to handle even the steepest curves with the utmost agility.

The engine design was derived from a racing V10 engineered for Le Mans. It's both lightweight (at 452 pounds / 205 kg) and environmentally-friendly -- it has an emissions control system and an on-board diagnostics setup that continually monitors exhaust. The cylinders are coated with a combination of nickel and silicon to reduce wear. Each of the two banks of cylinders has its own exhaust system with primary and main catalytic converters. A cross-flow system cools each cylinder individually to keep the engine temperature constant. The crankshaft assembly at the base of the engine accommodates an engine speed of up to 8,400 rpm.

Power-to-Weight: How Does the Carrera GT Compare? 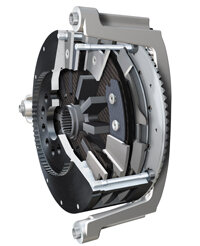 The Porsche Carrera GT is both light and sturdy. Instead of metal, its chassis is made of strong, lightweight, carbon-fiber-reinforced plastic (CFRP), also known simply as carbon fiber. Thanks to this composite material, the entire car weighs only 3,043 pounds (1,380 kg). Also because of the carbon fiber, Porsche can only produce two per day. Crafting individual parts out of carbon-fiber threads is a tedious process. See The Japan Carbon Fiber Manufacturers Association to learn about the manufacturing process.

Porsche has developed a new, more responsive clutch technology for the Carrera GT. The Porsche Ceramic Composite Clutch (PCCC) has a rotating mass approximately 10 times lighter than other clutches (see How Clutches Work). The Carrera GT's brakes are also unique to Porsche. The Porsche Ceramic Composite Brake (PCCB) system is lighter than conventional brakes and is extremely responsive: The Carrera GT can go from 100 mph (160 kph) to a halt within just a few feet of road.

Even the wheels on the Carrera GT are ultralight. They are made of forged magnesium rather than the conventional aluminum alloy. A tire-pressure monitoring system in each of the four wheels automatically detects when air pressure is low and signals a warning to the driver. A tire-repair kit in the car can seal any leaks, avoiding the need for a spare tire. 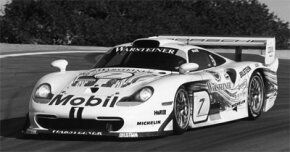 The Carrera GT owes many of its design cues to the Le Mans-winning 911 GTI racecar. It was built to combine racetrack performance and nimble handling. The car is immediately recognizable as a Porsche: The front headlights are a tribute to the 917, the first Porsche to win at Le Mans. The signature rear wing, which provides down force at top speeds, also falls within the distinctive Porsche design.

To keep the car as safe as possible when traveling at top speeds, Porsche designers have outfitted it with front- and side-impact air bags, anti-lock braking and traction control, high-powered Xenon headlights and steel-surrounded driver and passenger seats. The windshield and windows are designed for maximum visibility from all angles. 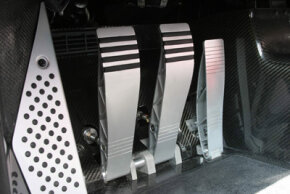 The interior of the two-door, two-seater car is as minimalist as a racecar. The pedals are certainly in the racecar tradition.

Although the bucket seats are leather, critics say they can feel a bit stiff, especially for the passenger. But the car does feature some luxury-car amenities, such as one-touch automatic windows and electronically adjustable, heated mirrors. It also comes with a travel bag, garment bag, briefcase, shoulder bag and center-console bag, all of which are finished in the same leather as the car's interior, in case the driver would like to be reminded of his or her Carrera GT at all times.

The steering wheel and center console are all ergonomically situated to be within easy reach of the driver. The ignition is on the left of the steering wheel rather than the right, which is meant to provide easier access upon entering the car. A dot-matrix screen displays mileage, a trip odometer and other data, and the car can also be outfitted with a navigation system and a BOSE stereo system.

The Porsche Carrera GT costs more than $440,000 and is in limited supply following an initial production of just 1,500 worldwide. Here's why.

For more information on the Porsche Carrera GT and related topics, check out the links on the next page.