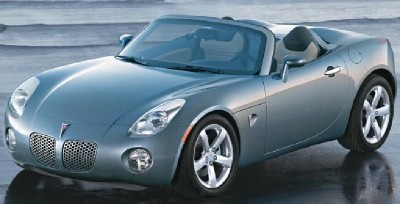 Impressive certainly described Pontiac's first sports car, the 2006 Solstice. It hit the streets less than four years after rabid public response to a we-might-build-it concept, itself whipped up in just 18 weeks -- unheard-of speed for lumbering GM.

Of course, this was Bob Lutz's doing, a demonstration that GM could get out fresh, exciting cars as fast as anyone in the world, and with world-class levels of performance and quality. He had to break all sorts of internal rules to get it done so quickly, so Solstice was just as much an example to GM people of what they could achieve when given half a chance.

Solstice was a lot like the ever-popular Mazda MX-5 Miata, which had been maturing since 1990 as the very definition of the modern "affordable sports car." Like the Japanese automaker, GM had to improvise in many areas to do something so very different from its usual fare, but the Solstice came together beautifully, an artful blend of some things old and some things new. When it was all over, GM had created a whole new platform called Kappa, with all sorts of possibilities for the future.

The concept was little-changed for production, and the Solstice emerged as larger and heavier than a redesigned Miata that made its debut at about the same time. Solstice hewed to the same classic formula, though, of a small and light two-seat convertible with manual-folding fabric top, rear-wheel drive, and four-cylinder power.

On the other hand, the Pontiac came on 18-inch wheels versus 16s or 17s, and matched its rival's "weekend racer" appeal with a $1095 Club Sport package and available limited-slip differential. Both listed options like air conditioning, cruise control, and power windows, but only Solstice offered satellite radio and the GM OnStar system.

Lutz promised a sub-$20,000 price, and kept his word by a slim $5, including destination charge, though the minimum soon rose to $20,490. But even that virtually level-pegged the least expensive '06 Miata, and Mazda's broader lineup stretched to nearly $27,000, thousands more than a Solstice with every possible option.

If Solstice and Miata were a close match on paper, they ran a virtual dead heat on the road. Most magazine comparisons decided the Mazda was just a little bit better, but the judgements were highly subjective, and most all reviews said you couldn't go wrong with the Pontiac.

It all came down to "horses for courses," with the Solstice winning points for eye appeal, a smoother ride, superior cornering stability, appreciated extra cockpit space, and stronger low-end pull. The Miata had the edge in handling, braking, fuel economy, and overall execution, plus a long record of reliability and a more convenient top.

But the Solstice had one advantage Miata could never match: It was all-American, a big emotional tug for many folks at a time when General Motors (Ford Motor Company, too) seemed fast headed for ruin. With all this, Solstice was as hard to get as a straight answer from a politician. Pontiac booked some 13,000 presale orders, but could fill only about half for model-year '06. That's because GM's refurbished Wilmington, Delaware, plant also had to build an upscale Saturn version, the 2007 Sky, plus variants for GM Europe. But people seemed happy to wait. Solstice was worth waiting for.

Pontiac spent some $4 million to promote Solstice with a "product placement" on the hit TV show "The Apprentice," but they needn't have bothered. The press had been breathlessly reporting every stage of the car's swift progress from auto-show concept to showroom reality. By the time it was ready, most all America knew about the Solstice.

The Solstice wait list may grow even longer with the 2007 addition of a GXP version with no less than 260 bhp from a new turbocharged 2.0-liter twincam four. Designated LNF, this engine is significant, marking GM's first use of high-efficiency direct fuel injection in North American production. Other premium features included a twin-scroll turbo that starts boosting sooner than conventional units, oil-cooled low-friction cast-aluminum pistons, and variable timing for both intake and exhaust valves that are sodium-filled for cooler running and less reciprocating weight.

Though not yet released in time for this article, the Solstice GXP was expected to start around $26,000, which also encompassed expected chassis upgrading, special trim, and added equipment. Pontiac projects 0-60 to fall from 6.7 seconds to 5.5, throwing down the performance gauntlet to Miata.

Solstice gives the Pontiac story thus far a happy note -- a small sign that better days finally might be at hand for Pontiac and all of GM. Let's hope that's the case. The thought this saga could be in its final chapter is unsettling, to say the least.