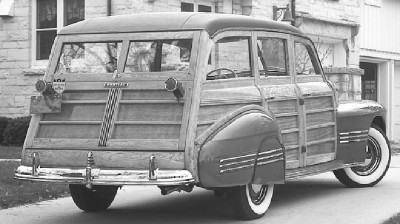 Like most other makes, Pontiac issued warmed-over '42 models for 1946-48, but stylists made each succeeding version a little different. The '46s, which began streaming from Pontiac, Michigan in September 1945, had a big bell-shaped grille of vertical and horizontal bars.

The grille was simplified for '47, then became busier again on the '48s, which adopted round taillights and were the first Pontiacs to carry Silver Streak badges.

Otherwise, the 1946-47 Pontiacs were entirely prewar in design and specifications. A three-speed manual remained the only transmission available. Chieftain submodels did not return, though other prewar offerings did. Eights cost about $30 more than Sixes for 1946, and postwar inflation pushed all prices steadily upward through '48, when the spread reached $1500-$2500. A DeLuxe Torpedo convertible bowed for 1947 at $1853 with the six, $1900 with the eight.

Though still basically '42s, the '48 Pontiacs had some interesting distinctions. A DeLuxe trim option for most models delivered chrome fender moldings, gravel guards, wheel discs (except on wagons), and other embellishments for $78-$90. Also, the eight was inexplicably uprated by one bhp.

But the big news that year was the introduction of Hydra-Matic Drive as a $185 option. This was a key factor in boosting Pontiac's model-year volume to near 235,500 because it so well-suited the eight-cylinder models that buyers increasingly preferred. Indeed, Eights outsold Sixes for the first time in 1947, and were far ahead for '48, when Hydra-Matic was ordered on 64 percent of Sixes but 77 percent of Eights.

This activity suggested that Pontiac would grow from a "big Chevy" into a lusher medium-price car -- and so it did. Along the way, Pontiacs were transformed from ho-hum to hot.

But that was still some years off when Pontiac unwrapped its 1949 models, which fared quite well in GM's first postwar redesign. All-new A-bodies, now on a single 120-inch wheelbase, were attractively styled under Harley Earl's ever-watchful eye. Highlights began with a lower full-width grille bisected by a modest horizontal bar above little vertical teeth. Silver Streaks still adorned hood and rear deck, but front fenders were now flush with the bodysides and the pontoon rear fenders snugged in closer.

Body types divided between Chieftain and Streamliner, the latter with fastback rather than notchback profiles, plus four-door wagons. Exclusive to Chieftain were a business coupe, long-deck sedan coupe (a.k.a. club coupe), and convertible. Both lines offered the usual choices of six- or eight-cylinder power and standard or DeLuxe trim except for the DeLuxe-only convertible. DeLuxes wore chrome headlamp rings, extra side moldings, fender gravel guards, and full wheel covers.

Newly optional high-compression heads lofted the six to 93 bhp and the eight to 106. Overall performance was little changed, however, as the '49s weighed a bit more than the '48s.

Continuing postwar inflation pushed prices considerably higher for 1949. The Chieftain DeLuxe Eight convertible jumped by $134; the woody wagon cost more than $2600. As at Chevrolet, the Pontiac wagon switched from part-structural wood to more-practical all-steel construction at mid-'49, though there was no change in price and little change in appearance. Despite the heftier price tags, model-year volume rose to nearly 305,000, the second-highest total in Pontiac history.