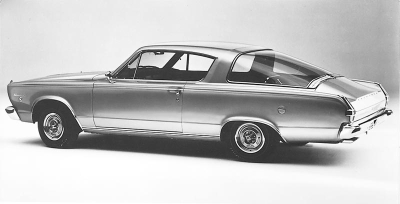 1966 Plymouths like this Barracuda were long on performance. See more pictures of Plymouth cars.

A full-scale Plymouth renaissance was evident for 1965, largely because the make returned to the full-size fold with big, blocky Furys on a new 119-inch wheelbase (121 for wagons).

Fury I and II offered two sedans and a wagon; Fury III added two- and four-door hardtops and a convertible; at the top were a bucket-seat Sport Fury convertible and hardtop coupe. They were the largest Plymouths ever, and naturally far roomier than the '64s.

Meanwhile, the advent of intermediates begun with Ford's 1962 Fairlane suggested a new role for the 116-inch-wheelbase "standard" Plymouth of 1962-64. With a blocky reskin to resemble the big Fury, it returned for '65 as the "new midsize" Belvedere and met strong buyer approval.

Offerings ran to Belvedere I sedans and wagon; Belvedere II four-door sedan, wagon, hardtop coupe, and convertible; bucket-seat V-8-only Satellite hardtop and convertible; and a much-altered drag-oriented two-door hardtop aptly named Super Stock. A wedgehead 426 with 365 bhp was standard on S/S and optional for other Belvederes. A 426 Hemi with 425 bhp was optional for the Super Stock. S/S rode a special 115-inch chassis and weighed just 3170 pounds, so performance was mighty.

But it was neither cheap at $4671, nor readily available as it was built for strip and not practical on the street. Normal Belvederes cost $2200-$2700 and offered mostly the same engines as Furys, though their base V-8 was a new small-block 273 rated at 180 bhp. This was a debored cousin of the 318, which was reengineered for '65 to save weight, yet the result was no less durable or potent.

Scoring points with performance-minded young-bloods, Plymouth finally took the incredible Hemi from track to show-room as a limited-production option for the 1966 Belvedere II/Satellite.

Heavy-duty suspension and oversize brakes were included to cope with its awesome power, which was 425 advertised but closer to 500 actual. Transmission was initially limited to four-speed manual, but three-speed TorqueFlite automatic was soon added.

Surprisingly docile at low "touring" speeds, Street Hemi Belvederes were electrifying demons when pushed. Correctly set up with proper tires and axle ratio, they could reach 100 mph in 12-13 seconds, making them prime quarter-mile competitors in the National Hot Rod Association's A/Stock and AA/Stock classes, along with Dodge's similar Coronet-based Hemi-Chargers.

Belvedere/Satellite's crisp-lined '66 styling continued with only detail changes for 1967, the last year for the original '62 "standard" platform. Topping the line was the new Belvedere GTX, a lush hardtop coupe ($3178) and convertible ($3418) equipped with a 375-bhp version of the big-block 440 wedge (evolved from the 426) introduced on Chrysler Corporation's full-size '66s.