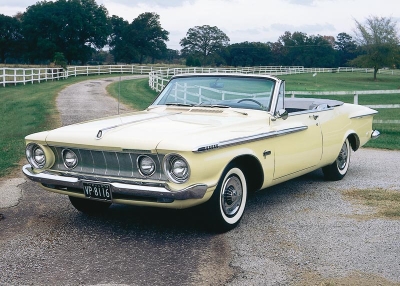 Lighter Plymouths, like this 1962 Fury, could get away with smaller engines.

The compact Valiant got Plymouth badges for 1961, and the standard line just got weird. A drastic restyle of the year-old Unibody eliminated fins and Fury's extra-cost "toilet seat," but taillights became ponderous bullets attached to scalloped ­fenders, while the pinched grille was eerily reminiscent of an old Graham "shark­nose."

A V-8 reshuffle cut the 260-bhp, while a hotter one arrived with 340 bhp. Chrysler's biggest V-8, the mighty 413 wedge, came to Plymouth with 350/375 bhp. But Plymouth's odd "plucked chicken" styling combined with still-mediocre workmanship reduced model-year volume to around 350,000. Industry standing fell to fourth place behind Rambler.

These lighter, more maneuverable '62 Plymouths could get away with a smaller standard engine. The 225 Slant Six became the power­plant for more models. Previous V-8s returned, though horsepower ratings fluctuated somewhat. Most significant was the boost given to the big 413, which now packed a whopping 410/420 bhp, making these Plymouths (and sister Dodges) the cars to beat at the dragstrip.

But mainstream ­buyers, not enthusiasts, were what mattered, and they still hungered for "full-size" cars. Ford and Chevrolet had them, and thus prospered as Plymouth's model-year volume plunged below 340,000 (again including Valiant). At least that would be the decade low.

Beating a hasty retreat, Plymouth issued more conservative, squared-up styling for '63, then a Chevy-like '64 facelift. Both were crafted under Ford alumnus Elwood Engel, who replaced Exner in 1962. But this didn't help much. Plymouth rebounded to fourth for '63 mainly on continuing strong demand for Valiants rather than appreciable gains in its "big-car" sales.

But this triumph came with a 426 hemi-head V-8 available only to racers, not the general public. Still, it was heartening to see Chrysler's famed '50s muscle mill revived for a new "horsepower race" that was already well underway.