Plymouth in 1959 and 1960: Plymouth Sport Fury and Plymouth Valiant 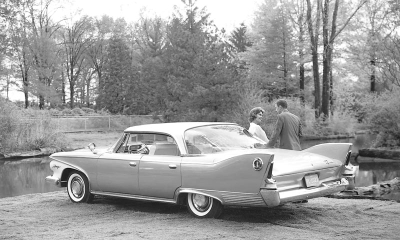 The 1960 Plymouth Fury was one of the Plymouth's hottest models.

The Plaza vanished and Savoy and Belvedere moved down a notch in price; Fury became a top-line series with two- and four- door hardtops and a four-door sedan in the $2700-$2800 range.

The division's '59 convertibles and hardtop coupes could be ordered with a simulated spare tire on the decklid, a lump of add-on tin reflecting Virgil Exner's love of "classic" design elements. It's since acquired the unflattering nickname "toilet seat." Typical of the gimmick-mad 1950s -- and increasingly of Chrysler -- was Sport Fury's standard "swivel-action" front seats: individual affairs (separated by a pull-down armrest) that turned outward at the touch of a lever to ease getting in and out. Sturdy latches kept them from swiveling while in use.

Also gimmicky, if occasionally predictive, were the several interesting Plymouth-branded show cars of the 1950s. They started with Ghia's 1950 XX-500, a pretty sedan that won Exner's patronage for the Italian coachworks to build later show cars and limousines.

The 1954 Explorer, another Ghia-built Exner design, was a smoothly styled grand tourer. Also in 1954, Briggs Manufacturing, the body maker purchased by Chrysler that year, contributed the two-seat Belmont roadster. The car was supposed to spur Plymouth into offering something similar for the showroom -- with Briggs-supplied bodies, of course -- thus answering Chevy's Corvette and the Ford Thunderbird.

A minuscule sports-car market precluded that, however, which was just as well: The Belmont wasn't much of a looker. The glassy '56 Plainsman, mentioned above, was followed by the even-glassier 1958 Cabana "dream wagon," which sported four-door hardtop styling that would make it to showrooms on 1960-62 Chrysler wagons, but not Plymouth's.

Plymouth built its hottest cars in the '60s -- and also began the long slow slide to its demise. Though Plymouth ran its usual third for 1960, it would not do so again for another 11 years. It dropped to eighth for 1962, knocked out by Rambler, Pontiac, and Olds -- and its own slow-selling line of smaller big cars with no full-size alternatives.

Though it began to recover the next year, Plymouth wouldn't dislodge Pontiac from third until 1971, settling for fourth instead. Much of this trouble reflected management's repeated failure to gauge the market correctly and have the right products at the right time.

Trouble was apparent right away, with 1960 volume easing to just under 448,000 despite support from the compact Valiant, which arrived at Chrysler-Plymouth dealers as an ostensibly separate make.

Sport Fury departed but other Plymouths returned with Highland Park's new "Unibody" construction on an unchanged wheelbase. "Misshapen" described the styling. Tailfins strained to mimic the outlandish appendages of '59 Cadillacs, and headlamp hoods stretched awkwardly down and around from a blunt front to the front wheel openings.

Good news began with a new 225-cid ohv "Slant Six" with 145 bhp, essentially a larger version of the Valiant's 170 unit to replace the old L-head six as base power.

Exceptionally strong and reliable, this fine engine would be a corporate mainstay for the next 20 years. V-8s were largely '59 reruns and all "wedge-heads": 318s with 230/260 bhp for Savoys and low-line Suburban wagons; 361s with 260/305/310 bhp for Belvederes and midline Suburbans; and top-dog Golden Commando 383 with new "Ram-Induction" manifolding and 330 bhp for Fury/Sport Suburban.

Though Rambler's more conservative styling and thriftier sixes scored 2000 more sales for calendar 1960, Plymouth won the model-year race by a substantial 25,000-plus, though that included 194,292 Valiants.