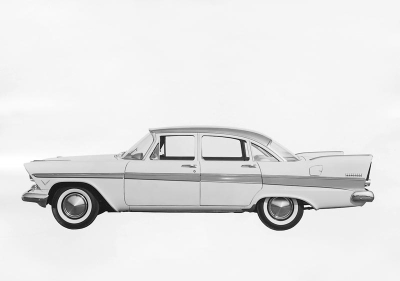 1957 Plymouths, like this Belvedere, had a tendency to rust..

Plymouth reclaimed fourth place for model-year 1956, which introduced "The Forward Look" -- essentially tailfins, achieved by raising rear fenderlines a little. Engineers brought forth push-button PowerFlite, a 12-volt electrical system, and an optional "Highway Hi-Fi" record player that used special platters and a tone arm designed to stay in the groove -- which it typically did not do on bumpy roads.

Suburbans became a separate line with two-door Deluxe, two- and four-door Customs, and four-door Sport models respectively trimmed like Plaza, Savoy, and Belvedere. A Sport Sedan four-door hardtop expanded Belvedere models, and a two-door hardtop did likewise for Savoy. Both Hy-Fire V-8s were larger and more potent, comprising a base 270-cid version with 180 bhp, and a pair of 277s packing 187 and 200 bhp.

An even hotter Plymouth arrived at mid-'56: the limited-edition Fury. An attractive hardtop coupe, it came only in white, set off by bodyside sweepspears of gold anodized aluminum. Power was supplied by a special 303 V-8 with 240 bhp via 9.25:1 compression, solid lifters, stronger valve springs, dual exhausts, and a Carter four-barrel carb.

A stock Fury could do 0-60 in about 10 seconds and reach 110 mph, though one modified example approached 145 mph on the sands of Daytona Beach. The Fury gave a big boost to Plymouth's growing performance image, and 4485 of the '56s were sold -- not bad for the $2866 price, some $600 above the Belvedere hardtop.

After record-shattering production of nearly 553,000, Plymouth zoomed to better than 762,000 with its stunning all-new '57 line. Ads said, "Suddenly, It's 1960" -- and not without reason. Next to its rivals, Plymouth did seem "three full years ahead," with the lowest beltline and highest tailfins of the Low-Priced Three. Wheelbases lengthened to 122 inches for wagons and to 118 inches for others. Offerings were unchanged through midyear, when a Savoy Sport Sedan hardtop was added.

The PowerFlow six had been coaxed up to 132 bhp by 1957, when Plymouth listed no fewer than five V-8s: 197- and 235-bhp 277s, new 301s with 215/235 bhp, and the Fury's even larger new wedgehead 318 with 290 bhp. TorqueFlite, Chrysler's excellent new three-speed automatic, was an optional alternative to PowerFlite. Also shared with other '57 Chrysler cars was new torsion-bar front suspension, whose superior geometry made for the best-handling Plymouth ever.

It's hard to remember how truly different Plymouth seemed in 1957: low and wide with distinctive "shark" fins, a graceful grille, a front bumper raised over a vertically slotted center panel, two-toning on the roof and tasteful bodyside color ­panels (sometimes the roof alone), huge glass areas (the convertible windshield curved at the top as well as the sides), and a delicate-looking thin-section roofline on hardtop coupes.

Suburb­ans gained load space with an upright spare tire mounted in the right-rear fender, an idea borrowed from the 1956 Plymouth Plainsman show car. The '57 Plymouths were indeed memorable, but their tendency to early rust -- reflecting a rushed development program and a consequent decline in quality control -- makes good examples fairly rare today.

A predictably mild facelift for '58 brought quad headlamps, a horizontal-bar grille insert (repeated in the under-bumper modesty panel), and small round taillights at the base of the fins (bright metal filled the space above). A trio of 318 V-8s offered 225-290 bhp (the latter standard for Fury), and a newly ­optional 350 "Golden Commando" wedgehead packed 305 bhp or, with that year's ultra-rare fuel-injection option, 315 bhp. Fuel injection proved troublesome and all were probably converted to carburetors. A deep national recession held production to just under 444,000, but most everyone built fewer cars for '58.