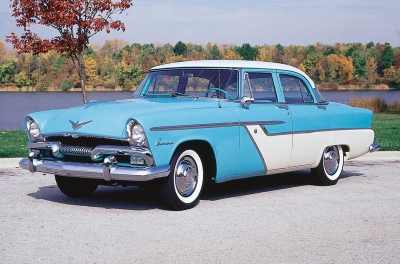 Two important mechanical changes occurred during '54. The old six was enlarged for the first time since 1942, a longer stroke swelling displacement to 230.2 cid and horsepower to 110. Also at about midyear came a fully automatic two-speed PowerFlite transmission as a new option. It would prove to be very popular.

Plymouth repeated this basic lineup for 1955, but with a dramatic difference: all-new styling hatched by Chrysler design chief Virgil Exner and executed under his assistant, Maury Baldwin. Suddenly, Plymouths looked exciting. What's more, they had performance to match, thanks to the first V-8 in Plymouth history -- and a new polyspherical design, at that.

Called "Hy-Fire," this new V-8 was an excellent overhead-valve unit in the small-block tradition begun with Studebaker's 232 of 1951. It premiered in two sizes: 241 cid and 157 bhp, and a 260 with 167 standard bhp or 177 with an optional "Power-Pak" of four-barrel carb and dual exhausts. Outstanding features ran to lightweight aluminum pistons and carburetor, and chrome-plated top piston rings for longer life and better oil control. Tuning changes brought the old six, now called "Power­Flow," to 117 bhp.

But Plymouth's most-visible '55 attraction was its crisp new styling: pointed front and rear fenders, smooth flanks, shapely tail, a bright but not gaudy grille. Two-toning was confined to the roof and, via optional moldings, broad bodyside sweep ­panels. Four-door wagons returned for the first time since 1948 as Plaza and Belvedere Suburbans. The line-topping Belvedere convertible came only with V-8, as it would through the end of the decade.

Ads proclaimed the '55 a "great new car for the young in heart." It was certainly a clean break from Plymouth's plodding past. Customers rushed to buy -- encouraged by prices little higher than in '54 -- but production lagged and Plymouth dropped to sixth for the model year at 401,000 units. But volume for calendar '55 was a rousing 742,991 (including some '56s, of course) -- a record that would stand well into the '60s.