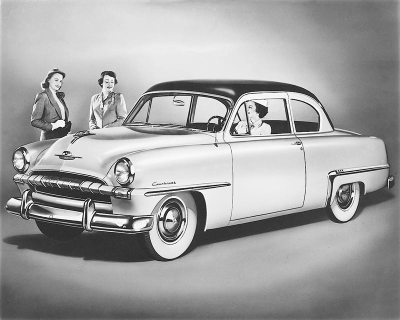 As continuations of the new '49s, the 1950-54 Plymouths were well-engineered, solid, and reliable; but they were also squarish, stubby-looking, and none too fast.

The ancient L-head six was raised to 97 bhp for '49 and would remain there through 1952, after which it went to 100 bhp (probably by the stroke of an ad writer's pen). Plymouths were still thrifty (20-23 mpg ­wasn't uncommon), but hard-pressed to beat 90 mph. However, automatic electric choke and combined ignition/starter switch arrived as innovations for the low-priced field.

The 1950 line was basically a '49 reprise. An effective facelift brought a simpler square grille with large horizontal bar, slightly longer rear decks (to relieve the boxiness), and taillights placed low within reworked fenders. The Special outsold the plain DeLuxe by about 7 to 5.

After some 611,000 of its 1950s, Plymouth built about the same number of its 1951 models, which gained a modified hood and a lower, wider grille that made frontal appearance a little less blunt.

New model names accompanied the fresh face. Short-wheelbase DeLuxes were retitled Concord and now included a two-door Savoy wagon besides the Suburban. The long-chassis DeLuxe and Special DeLuxe were now Cambridge and Cranbrook, respectively. The latter listed a convertible and Plymouth's first hardtop coupe, the Belvedere, which typically wore "saddleback" two-toning with the roof and rear body (but not rear fenders) in a contrast color.

Ford also offered its first hardtop for '51, but it, too, was a year behind Chevrolet's Bel Air. The Belvedere trailed both in sales by wide margins, but was still pretty popular, with 51,266 built for 1951-52.

Chrysler didn't bother to separate 1951 and '52 production, ­mainly because its cars changed so little. Plymouth was no exception, though a rear nameplate integrated with the trunk-handle (replacing separate script) was a small spotter's point. Overdrive arrived for '52 as a new option, and all Plymouths continued with an important 1951 improvement: Oriflow shock absorbers, a Chrysler hydraulic-type designed to improve ride and handling.

But dumpy looks, a weak old six, and lack of full automatic transmission put Plymouth at a sales disadvantage in '52, when output slid by a substantial 204,000 units to below 400,000, aggravated by government-ordered civilian production cutbacks for the Korean War.

The '53s addressed some of the competitive deficits, starting with an outer-body re-skin that brought flow-through fenderlines, a one-piece windshield, and a more aggressive grille. A single new 114-inch wheelbase was used for a revived two-series lineup minus Concord (Cambridge expanded to embrace the business coupe and wagons).

Another ploy to boost sales was the midyear introduction of semiautomatic "Hy-Drive," a manual transmission with torque converter that eliminated most clutch work, though you still had to clutch between forward and reverse.

But the '53s still looked small, and so did the facelifted '54s, which were as uninspired as any Chrysler product. Volume dwindled from the previous year's 650,000-plus to around 463,000 -- less than half of Ford/Chevy output. Models were regrouped again, this time into cheap Plaza, midline Savoy, and top-shelf Belvedere series covering a $1600-$2300 price spread.

Plaza and Savoy each listed a club coupe, sedans with two or four doors, and a Suburban wagon; there was also a Plaza business coupe. Belvedere comprised four-door sedan, convertible, Suburban, and Sport Coupe hardtop.