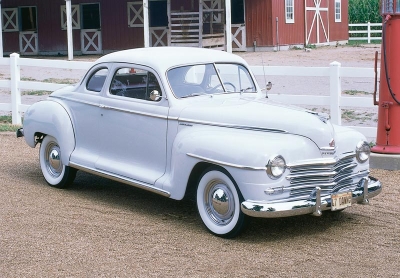 Cars like this 1947 Plymouth Special DeLuxe benefited from a 1946 model-line facelift.

While Plymouth manufactured munitions and military engines during the war, stylists like A. B. "Buzz" Grisinger, John Chika, and Herb Weissinger worked on postwar ideas when­ever they could. Typical of Chrysler thinking at the time, these involved smooth, flush-fender bodies with thin door pillars and wraparound grilles.

But like most everyone else, Plymouth resumed civilian operations with mildly modified '42s, which the booming seller's market happily consumed into model-year '49. The first all-new postwar Plymouths bowed in March '49 as squarer and more upright than any wartime study.

Plymouth's 1946-48 facelift involved a more modest grille with alternating thick/thin horizontal bars, rectangular parking lights beneath the headlamps, wide front-fender moldings, a new hood ornament, and reworked rear fenders. DeLuxe and Special DeLuxe returned, but without utility models. No styling or mechanical changes would occur through early '49, so serial numbers are the only clue as to model year.

When the "real" '49s arrived, Grisinger and Weissinger had departed for Kaiser-Frazer and a new styling philosophy was in force. It reflected the tastes of K. T. Keller, who'd taken over as company president following Walter Chrysler's death in 1940.

No fan of low "torpedos," Keller preferred what designers termed "three-box styling -- one box on top of two others," believing in function over form. "Cars should accommodate people rather than the ideas of far-out designers," he said. What he failed to grasp was how much postwar buyers wanted the long, low look -- never mind the reduced headroom or ground clearance. In time, Keller's practical bent would severely hurt company sales.

But the seller's market was at its height in 1949, most everything sold no matter what it looked like, and the new Plymouth offered an efficient, comfortable, and roomy package with good visibility.

Plymouth liked to credit its '49 Suburban as the first "modern" wagon, but Chevy, Olds, and Pontiac also issued all-steel haulers during 1949. Still, the Suburban cost only $1840, quite a bit less than the GM models, and thus sold well: nearly 20,000 for '49.

Buyers evidently loved wagons that didn't require costly, time-consuming upkeep. Within four years, other Chrysler makes and the rest of Detroit had put "woodys" to rest. Plymouth kept its wood-framed wagon through 1950.

Oldsmobile's 1949 "Rocket" 88 fired the gun for a "horsepower race" that turned all manner of staid cars into stylish sizzlers. Plymouth was one of them.

But even more than Chevrolet, Pontiac, or sister Dodge, Plymouth reinvented itself because it had to. Although the make spent most of the early '50s still entrenched as number-three, it sold fewer and fewer cars after '49, bottoming to fifth in calendar-year sales by 1954.