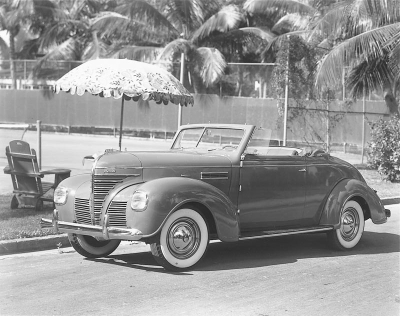 A refreshing facelift arrived for 1939, the work of Raymond H. Dietrich, the great coachbuilder who then headed Chrysler styling. Hallmarks included a strongly peaked "prow" front, perhaps inspired by the Lincoln Zephyr's, plus a Vee'd two-piece windshield instead of the previous single pane. Headlights, now rectangular, nestled within the front fenders, and the gearshift moved from floor to steering column.

The canvas convertible top could be power-operated for the first time in any car, a definite selling point -- especially in the low-price arena. Offerings largely reprised the '38 line, but Roadking added a Suburban and two-door utility sedan. The former saw just 97 copies.

Plymouth's long models were equally slow sellers: only about 2000 for the model year. Such cars would be a Chrysler specialty for many years to come, but none would sell well.

Making a final stand in the DeLuxe series was the rumble-seat convertible coupe and a 117-inch-wheelbase five-seat convertible sedan. The latter was a Plymouth exclusive at Chrysler Corporation for '39, revived for a 12-month stand. After a big dip below 280,000 for recessionary '38, Plymouth recovered nicely with 1939 volume of over 417,000.

Though 1940 prices began as low as $645, Plymouths remained a bit costlier than equivalent Fords. They also remained noticeably slower than Dearborn's V-8/85s despite a token two extra horsepower for 1940.

Yet if no speedway threat, the Plymouth six still provided reliable cruising at over 65 mph, and was well-known for economy. A notable manufacturing advance was Chrysler "Superfinish," a special process of giving certain internal engine parts a mirror-smooth surface for reduced friction and decreased wear.

The slow-selling limousine was axed after just 24 were built. Other '41 rarities were the DeLuxe club coupe (204) and the standard club coupe (994), utility sedan (468), and Suburban (217). All models boasted another Chrysler engineering first: the Safety-Rim wheel, with a beaded circumference to prevent tire loss in a blowout. The battery moved under the hood for the first time, and Plymouth offered "Powermatic" shift, a ­vacuum-transmission assist.

War-shortened 1942 introduced a more massive look via a wider grille and front fenders, plus door sheetmetal extended to cover the running boards. The six was enlarged for the first time since 1934, bored out to 217.8 cid and 95 bhp; it wouldn't be touched again until 1949. Standard-trim models departed, and Special DeLuxe expanded with the town sedan, a new Chrysler style with more formal, closed-in rear roof quarters.

Plymouth Division's 1942 output was close to 152,500 when the government halted civilian automobile production in February for the duration of World War II. While all '42 Detroit cars are quite scarce today, some of these Plymouths are especially rare. For example, only 80 utility sedans, 1136 wagons, and 2806 convertibles were built.