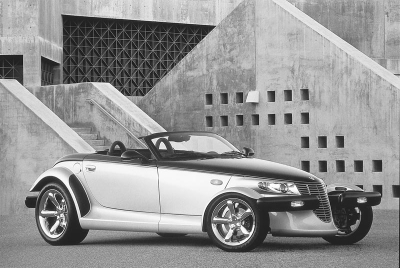 Plymouth Prowlers, like this 2001 model, were much talked about but didn't boost sales as much as retailers had hoped.

Other magazine tests showed less-dramatic improvements, but the '99 was stronger by most accounts. And though the traditional hot-rod exhaust burble was still missing, so were some of the '97 model's unwanted cowl shake and body quivering. Base price went up $1000, but nobody complained.

Yet for all its high-profile pizzazz, Prowler did nothing to spur sales of workaday Plymouths, and that spelled trouble once Germany's Daimler-Benz absorbed Chrysler Corporation in late 1998. The new DaimlerBenz was troubled from the start, and the mostly German top brass were far more concerned with "shareholder value" than any value Plymouth might have for their American "division."

Thus, in late October 1999, after months of mounting rumors, DC's American-born president, James Holden, announced that Plymouth would be terminated after model-year 2001 as irrelevant to the company's new "global growth strategy." It was a sad day for many car lovers, but industry analysts (and even Chrysler-Plymouth dealers) weren't surprised. After all, Prowler was only the first Plymouth since the '69 Barracuda with no direct Dodge duplicate, and Dodge always did better with shared products.

But C/D's Pat Bedard, himself a former Chrysler engineer, begged to differ. In a March 2000 epitaph, he noted that Plymouth sales might still be sliding, but were "hardly dead … Voyager sales not only outnumbered Plymouth cars in 1998, they outgunned the combined minivan efforts of the Chevrolet Venture and Pontiac Montana … There's something odd, too, about DC's notion of global growth. Yeah, Plymouth is only a U.S. brand. So what? … Low-priced brands always slump when people have the dough to buy higher on the status ladder. [When they don't], a trusted budget brand makes a great lifeboat [for an automaker]. Building a fresh one, as GM did with Saturn, costs billions … I think DaimlerChrysler is walking away from sales."

Maybe so, but losing Plymouth was easy for DC, and customers could be steered to other company brands. With that, Breeze was dropped with the 2001 redesign of its Dodge and Chrysler siblings (which would then presumably take up the slack), and rebadging created Chrysler Voyagers even before the company's new minivans arrived, also for '01. The second-generation 2000 Neon was sold as Plymouth, but only for about 18 months and without the sporty options Dodge offered.

Prowler, too, became a Chrysler, swapping nameplates during model-year 2001, but hung on through '02. The 2000 edition got revised damping and adjustable shock absorbers for a more pliant ride, plus a few minor feature additions. Otherwise, only colors were changed.

Left behind in Plymouth's demise was the intriguing Howler concept. Basically a Prowler with a handsome new squared-off tail, it offered usable luggage space at last, achieved by exchanging the rear transaxle for a conventional front-­mounted transmission. Even better, though, that gearbox was a five-speed manual bolted to a V-8, a torquey 250 4.7-liter borrowed from the Jeep Grand Cherokee. Enthusiasts cheered, but there was no hope for Howler, a strictly what-if dream unveiled only weeks before Plymouth's announced execution.

Plymouth wasn't Detroit's only historic nameplate to be killed off by new-century corporate tactics. General Motors' Oldsmobile went to the gallows barely a year later. But there's an ironic footnote in that the 2001 PT Cruiser was once planned for Plymouth, as product chief Tom Gale told us. Considering its huge sales success as a low-priced Chrysler, the versatile, "way-cool" Cruiser could have been just the comeback car Plymouth needed, setting the stage for more Plymouth-only models and a true revival of the make. A pity Chrysler walked away from that, too.