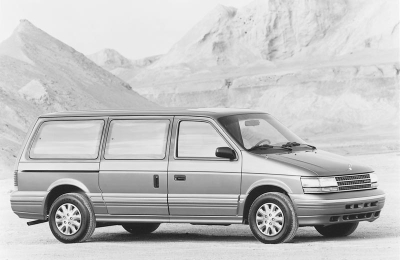 Models like the 1994 Plymouth Grand Voyager saw decent sales, but not enough to prop up the ailing carmaker.

Sundance was treated to a few more yearly changes than Acclaim, but not many. Predictably, most were shared with Dodge's Shadow. Sundance never got a convertible like its P-body sister, but it did add budget-priced three- and five-door America models for 1991. Though you could get one for as little as $7699, you had to make do with less sound insulation, fewer options, no cargo area carpeting, and just a 93-bhp version of the veteran 2.2-liter inline four.

For '92, Sundance dropped its sporty RS option in favor of a new confection reviving the Duster name from Valiant days. Available for both body styles at about $2100 above base-trim spec, this package delivered sporty paint, applied tape graphics, a slightly firmer suspension, cast aluminum wheels, more aggressive standard tires, and -- the big attraction -- the same 3.0-liter V-6 available in Acclaim.

Ordering the Duster also opened up a new optional transmission: the first four-speed automatic available in a Chrysler subcompact. Though 141 bhp implied a certain speediness, this Duster was no whirlwind, but it was pleasantly swifter than any four-banger Sundance save the rough and raucous turbo models.

Duster stayed on for '93, but America and Highline trim disappeared in favor of a single price level equipped with elements of both. Antilock brakes were newly optional, a laudable addition. Like Acclaim, Sundance added a right front "mouse-belt" to meet 1994's requirement for dual passive restraints, but five-doors exited in January, leaving three-doors to finish out the last model year. Considering its elderly K-car origins and lack of real pizzazz, Sundance sold quite well in this period, falling no further than 62,800 for model-year '91 and hitting nearly 86,000 for '93.

The reason Sundance lost its five-door models early was the advent of a much better small Plymouth, the Neon. Of course, it was all but identical with the 1995 Dodge Neon that arrived at the same time, so everything said about that version applies to this one -- save for badges done in Plymouth blue instead of Dodge red.

As with minivans, Plymouth's Neon didn't sell quite as well as Dodge's, yet C-P dealers moved some 121,400 Neons for the '95 season. This was strong public acceptance recalling that of Plymouth's first front-drive car, the 1978-79 Horizon, yet Neon was far superior, offering spunky performance, taut handling, and surprising interior room thanks to scaled-down "cab-forward" styling that managed to be winsomely cute. Low prices also spurred sales: under $10,000 to start. About all that needed fixing were undue engine and road noise, patchy workmanship, and obviously low-buck interior materials.

Overall, though, Neon represented impressive value, and competitors lost sleep trying to figure out how Chrysler could deliver so much small car for the money. Even vaunted Toyota was moved to take one apart to learn its secrets.

Speaking of cab-forward, Plymouth was denied the car that pioneered the look, Chrysler's full-size LH sedan of 1993 -- and more's the pity. One suspects a new LH-based "Fury" would have sold well. But Plymouth was always in the loop for the new midsize JA platform, even if its 1996 Breeze was a year behind the similar Chrysler Cirrus and Dodge Stratus.

Per Plymouth's ongoing mission, Breeze was the cheapest of the JA trio, appealingly base-priced at $14,060, about $300 below the last Acclaim. Though inevitably less lavish than its sister "cloud cars," Breeze was no stripper, boasting standard dual air bags, air conditioning, AM/FM stereo radio, tilt steering wheel, tinted glass, and fold-down back seat.

An eggcrate grille echoed Acclaim, but attached to a much slicker cab-forward sedan body on a rangy 108-inch wheelbase that again made for relatively generous passenger and cargo space. As the most-affordable JA, Breeze offered the fewest options, though the list included important items like antilock brakes; integrated child safety seat; and power windows, mirrors, and door locks.

Price reasons also dictated but one engine: the new 2.0-liter overhead-cam inline four designed and built by Chrysler for the Neon. Though its 132 bhp promised slow going in the larger, heavier JA, the Breeze proved surprisingly able, running 0-60 in 10 seconds with standard five-speed manual and about 11.5 with optional four-speed automatic -- decent if not exactly, er, breezy.

Even nicer perhaps, Consumer Guide® found this Plymouth a very tight and solid car by any standard, a real revelation for a low-priced Detroiter. And, of course, Breeze was no less fun to drive than a Cirrus or Stratus, inheriting their crisp, responsive front-drive handling; stable, well-planted wide-stance cornering poise; precise power steering; and delightfully "tossable" feel.

For 1998, Chrysler's well-known 2.4-liter four with 150 bhp became optional for Breeze. Automatic was mandatory, so the bigger engine delivered little more zip than the smaller one with manual, but it did reduce driver stress in the daily grind and used little more gas. Any Breeze was more comfortable for '99, thanks to softer damping providing a more absorbent ride.

Together with Neon and an all-new crop of nicely redesigned 1996 Voyagers, the Breeze gave reason to be optimistic about Plymouth's future. So did Chrysler's stated commitment to the make, symbolized by a handsome new "Mayflower" logo. Marketing efforts were stepped up to "reintroduce" Plymouth to those who still remembered, while hammering home the "high value" message to younger folks who didn't.

One of the more novel initiatives involved setting up computerized "Plymouth Place" kiosks in selected major shopping malls, where prospective buyers could learn about the various models and even price one to order without fear of being set upon by some salesperson. Chrysler also staked out some cyberspace for Plymouth on the burgeoning Internet, and returned to forceful advertising of more conventional kinds with the slogan "One clever idea after another."