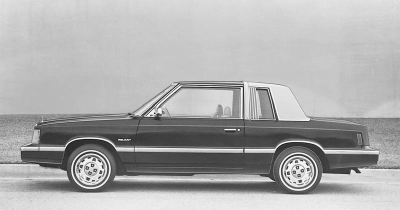 Plymouth relied on Reliants (shown here as a 1981 model), and Horizons for sales in the 1980s.

The Plymouth product story in the '80s is thus basically the same as for the duller Dodges. And a short one it is, too, because the make missed out on reborn convertibles, luxury models, and a latterday ponycar like the front-drive Dodge Daytona.

With that, most Plymouth sales came from just two model lines: the L-body Horizon and derivative TC3 coupe (retitled Turismo for 1983-87), and the seminal K-body Reliant, which ousted Volare as the division's compact for 1981.

In ­yearly styling and engineering changes they parallel Dodge's near-identical Omni/Charger and Aries, respectively, except for minor trim and, in line with Plymouth's solid-citizen role, no Shelby-tuned subcompacts.

In most years, Reliant earned honors as Chrysler's single best-selling model line. Wagons departed after 1989, but coupes and sedans finished out Reliant's run as value-equipped "America" models priced at $7595. Plymouth's Horizon also outsold Dodge's Omni, though not by much, averaging 150,000 per year except for about 90,000 managed for 1982-83.

Badge-engineering gave the make token representation in the full-size and intermediate ranks. For the former, Plymouth was doled a "downsized" 1982 Gran Fury, a near-twin of the 112.7-inch-wheelbase M-body Dodge Diplomat to replace the slow-selling 118.5-inch-wheelbase Gran Fury of 1980-81. This sputtered along as a four-door sedan with few interim changes through swan-song 1989.

Engines were the expected Slant Six and 318 V-8 (V-8 only after '83), and trim levels were restricted to only one or two. Of course, this was nothing like previous Gran Furys, being the original Aspen/Volare compact as evolved through the midsize 1977 Diplomat/Chrysler LeBaron. Most sold to police and taxi fleets, where the M-body's aging but proven rear-drive design was an asset.

Canadians were offered an M-body Plymouth before 1982 as the Caravelle. For '85, this name came to the U.S. on a restyled, downpriced version of what had been the Chrysler E-Class. All but a copy of Dodge's 103.3-inch-wheelbase 600 four-door sedan, this front-drive Caravelle was nominally Plymouth's midsize family car, and sold in plain and uplevel SE trim at a respectable 35,000-45,000 a year until its 1988 retirement when sales dropped to 17,000.

Unlike Dodge with the 600 ES, Plymouth was not allowed a more sporty model or even a five-speed transaxle, but for a time the 146-bhp turbocharged edition of Chrysler's 2.2-liter (135-cid) "Trans-4" engine was optional. Most Caravelles had either a 2.6-liter (156-cid) Mitsubishi four with a balance shaft or, after debut-model 1985, the 2.5-liter (153-cid) enlargement of Chrysler's 2.2. All carried TorqueFlite automatic.

Like Dodge, Plymouth's other big winner in this decade was the practical K-based T-115 minivan, new for '84. The name here was Voyager (retained from Dodge-clone big-Plymouth vans of the '70s), but that and a different grille were about all that separated it from Dodge's Caravan.

Added to the K-cars' success, the fast-­selling minivans were a big reason why Chrysler Corporation enjoyed record profits by middecade, a mere five years after nearly tumbling into the financial abyss. Because the industry counts minivans as trucks rather than cars, Voyagers don't figure in the Plymouth production totals cited here.

Plymouth got in on the new-for-'87 P-body, the more upscale subcompact originally intended to replace Omni/Horizon. That replacement didn't happen immediately, though, as strong demand for the high-value "America" models announced for 1987 prompted Chrysler to keep the L-bodies through 1990. A surprising number of changes occurred that final year: new dash, standard driver-side air bag, and no America tag. Identically priced at $6995 for 1990, the Omni/Horizon went out as outstanding value for the money.

Plymouth's name for the erstwhile successor P-body was Sundance (recalling an early-'70s Satellite trim option). Though predictably all but identical to Dodge's Shadow, Sundance aimed more at luxury-minded small-car shoppers, offering three- and five-door notchback sedans with only one well-equipped trim level and a suspension tuned more for ride than handling.

Also available through 1990 were standard 93-bhp 2.2 and optional 96-bhp 2.5, both normally aspirated engines with electronic throttle-body injection. All could be teamed with standard five-speed manual or optional TorqueFlite transaxles. A new face with flush headlamps cleaned up Sundance's 1989 appearance. The 1990s added a driver-side air bag in the steering-wheel hub as a worthy safety advance.

Like Shadow, Sundance generated nearly 76,000 sales in its first year. Production then settled at around the 80,000-100,000 unit level through 1990. This suggested that Chrysler could still reach small-car buyers, but not nearly as many per year as in Valiant days. Still, many things had changed, and Sundance was arguably just as right for its time and market.

That also applied to the new-for-'89 Acclaim. Like Sundance, this was conceived to replace an older Plymouth, the remarkable Reliant, but the K-car's continuing sales strength ­prompted corporate planners to let the new and the old run side-by-side that year, as Volare and Valiant did in '76.

More immediately, Acclaim replaced Caravelle as Plymouth's midsize sedan. Riding the same wheelbase but sharing the latest corporate A-body with that year's new Dodge Spirit. There was still lots of Reliant in Acclaim styling, but the look was more contemporary: formal yet smooth, and carefully detailed for good aerodynamic efficiency.