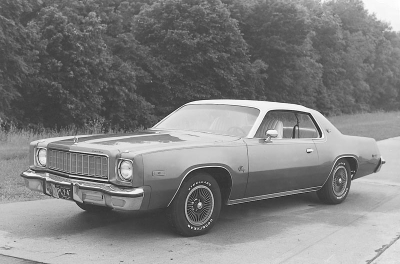 The big full-size Furys vanished after 1977, but for 1971-73 they were restyled continuations of the 1969-70 "fuselage" body/chassis design. They retained the same four-series lineup of Sport Fury and three lower trim levels ­designated by Roman numerals.

Plymouth began whittling away at this group for '72, with Gran Fury taking over at the top and economy Fury I offerings cut from four to one. Meanwhile, Chrysler Corporation was preparing a brand-new design for all its full-size cars, scheduled well in advance of the brewing Middle East oil crisis.

Nevertheless, the hulkier new 1974 Fury (and the correspond­ing Dodge Monaco and Chrysler Newport/New Yorker) seemed incredibly ill-timed. They were not only heavier, but looked it: square and undistinguished on wheelbases stretched two inches.

A Slant Six was available in some models, but made them ­grossly underpowered. V-8s were the now-usual assortment of 318, 360, midrange 400, and big-block 440. Significantly, sales didn't improve even after gas supplies eased and big-car sales began recovering.

After 1974, the full-size Fury was called Gran Fury to avoid confusion with Plymouth's renamed '75 intermediate Furys. But somehow, Chrysler never seemed to understand that badge shifting seldom (if ever) makes any difference in sales. It sure didn't here. Except for the midrange Custom sedan, not a single Gran Fury model scored more than 10,000 sales for 1976, and production of some Brougham and wagon models was laughably low for a traditional high-volume make.

Hoping to cut such losses, Plymouth trimmed big-car offerings for '76 and again for '77 -- mainly hardtop sedans and some trim variations. But the losses continued, and Plymouth temporarily fled the full-size field. It halfheartedly returned for 1980 with a bargain-basement version of the pseudo-downsized R-body Chrysler Newport, again bearing the Gran Fury name and intended mainly for the fleet market. But sales, at less than 19,000 for the model year, were disappointing.

The shape of Plymouth's future arrived with the all-new 1978 Horizon, a five-door subcompact sedan whose 99.2-inch wheelbase made it the smallest Plymouth in history. It was virtually identical to Dodge's Omni except for grille insert, taillights, and badges, and thus shared distinction as America's first domestically built front-drive small car.

Horizon sold briskly from the start despite later ill-founded charges that handling wasn't all it should be. In fact, ­roadability was one of Horizon's strengths. So was fine economy, courtesy of a 70-bhp, Volkswagen-based 104.7-cid four-cylinder engine. Another plus was the practical, space-efficient hatchback body. A sleek 2+2 "fasthatch" coupe called TC3, riding a 96.7-inch wheelbase, added some spice to the line for '79.

But by that point, Plymouth was a mere shadow of its former self, down to just Horizons, TC3s, and Volares. Management tried fostering the illusion that this was still a "full-line" make by slapping Plymouth nameplates on various "captive imports" from Mitsubishi of Japan. These included the little Arrow hatch-back coupe (1976-80), the larger and more luxurious notchback Sapporo (1978-82, sold with a Dodge double reviving the Challenger name), and the front-drive Champ economy hatchback (new for '79 and duplicated as the Dodge Colt).

The badging was a good marketing move, providing vital sales support at a crucial time, but it only underscored how low once-prominent Plymouth had fallen.

Though having fewer domestic models was a definite sales handicap, Plymouth's also-ran status in the '80s stemmed as much from a conscious decision to change its role within the corporate lineup. Planners decreed that Chrysler would cater to luxury buyers, per tradition, while Dodge would again go after the performance crowd. This left Plymouth with nothing to emphasize except reliable value-for-money cars that duplicated Dodges but were less interesting and fewer in number.