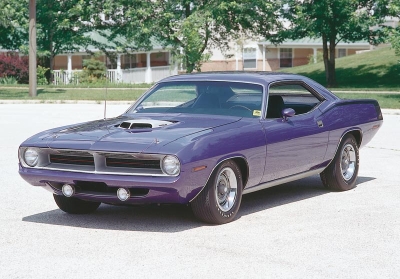 The 1970 Barracuda was lower and heavier than previous models.

Appearing for 1970 was a fully redesigned third-generation Barracuda that donated its basic structure to a new Dodge ­double, the Challenger. Against the 1967-69 Barracudas, the '70 was two inches lower, three inches wider, a tad shorter, much heavier, and somehow more conventional-looking.

Wheelbase remained at 108 inches, but the new "widebody" design had plenty of room for every big-block V-8 in the Chrysler stable, up to and including the 426 Hemi and a new six-barrel 440 that was conservatively rated at 390 bhp.

Those two were available with a special "shaker" hood, so-called because a functional scoop attached directly to the carb housing poked through the panel and could be seen a-shakin'. The trademark fastback was no more, but hardtop and convertible returned in three forms: base, performance-oriented 'Cuda, and luxury Gran Coupe (which in ragtop form was thus a Gran Coupe convertible).

Perhaps the most-interesting 1970 Barracuda was the racy, midyear AAR, named for and inspired by the Dan Gurney All-American Racers team cars that contested that year's Trans-Am series in Sports Car Club of America competition.

Based on the 'Cuda 340 hardtop, the AAR was easily spotted by its bold body-side "strobe" stripes, wide tires, matte-black fiberglass hood with functional scoop, rear spoiler, and long exhaust trumpets peeking out from beneath the rocker panels.

The last also made the thing unmistakable to the ear. A modified 340 V-8 carried an Edelbrock intake manifold mounting three two-barrel carbs, plus special heads and a fortified block and valvetrain. Heavy-duty suspension was also included. Planned production was 2800, but the final figure is estimated at no more than 1500.

The Duster 340 was a racy derivation with a mechanical package similar to the 'Cuda 340's. Equip­ment ran to the 275-bhp small-block, three-speed floor-shift, front disc brakes, wide tires, and tuned suspension.

Among 1970 Plymouth intermediates was a startling newcomer: the Superbird. Part of the Road Runner series, it was an evolution of Dodge's 1969 Charger Daytona, with a similar hidden-headlamp "droop-snoot" and huge struts carrying a stabilizer wing high above the rear deck. The Superbird looked fast -- and was: Racing versions recorded over 220 mph.

Street models came with a four-barrel 440 and TorqueFlite automatic, but the 440 "Six Pak," 426 Street Hemi, and four-speed manual transmission were all optionally available. Dodge built some 500 Charger Daytonas to qualify it as "production" for NASCAR events; then the sanctioning body increased its minimum to 1500. That was no problem for Plymouth, which ended up building 1920 Superbirds.

The Superbird's greatest moment came at the 1970 Daytona 500, when Pete Hamilton romped home at an average speed of nearly 150 mph to best every Dodge and every Ford. Superbirds then went on to take 21 of Chrysler's 38 Grand National wins that year. But NASCAR changed the rules again for 1971, thus ending the Superbird's dominance on the high-speed ovals -- and the car itself.

Full-size Plymouths got their own dose of extra performance for 1970. Most notable was the new Sport Fury GT, a hardtop coupe carrying a 350-bhp 440, heavy-duty suspension, and long-legged rear axle ratios (up to 2.76:1).

Also new to the Sport Fury line was the S/23 hardtop. Its standard 230-bhp 318 wasn't in the GT's league, but you did get a tuned chassis and modest "strobe" body stripes. Other Sport Furys were upgraded to take over from the now-departed luxury VIP, and all versions now hid their headlamps within a big new loop bumper/grille worn by all full-size Plymouths. Arriving in February was a plush Gran Coupe pillared two-door boasting most every comfort and convenience feature in the book at $3833 without air conditioning or $4216 with A/C.