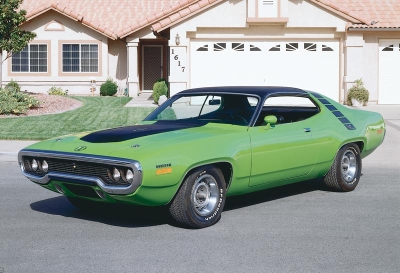 A new B-body with no change in wheelbases gave Plymouth's 1968 intermediates a more rounded look that was just as ­pretty. Belvedere was reduced to a low-line coupe, sedan, and wagon. Satellite was now the full-range volume series, and Sport Satellite denoted a top-line wagon, convertible, and hardtop coupe priced just below GTX ($2800-$3240).­

Exterior badging comprised RR nameplates and cartoon-bird decals inside and out, along with side-facing dummy hood scoops that could be made functional for a little extra money. Power came from a 335-bhp 383 with intake manifold and big-port heads from the 440.

The Street Hemi was available, as was a slew of comfort and cosmetic goodies; beefy suspension, four-speed, and a cute "beep-beep" horn were standard. Dynamite on street or track, this finely tuned package of power and performance cost only $2800-$3100 -- an extraordinary bargain for the day.

The midsize Plymouths continued through 1970 with only minor interim changes. A convertible and more standard equipment bolstered Road Runner's appeal for 1969, though higher prices didn't ($3000-$3300). The ragtop GTX disappeared after '69 and a mere 700 copies.

Following a mild '66 facelift, the big Furys received crisp new lower-body sheetmetal that added inches to length and width. Wheelbases and engines stayed largely the same, with the big-block 440 option returning from '66 with 350/375 bhp. Fury's standard V-8 remained a 230-bhp 318; a brace of optional 383s offered 270/325 bhp. The 225 slant six continued as base power for all models.

Plymouth joined Ford and Chevy in the move up to medium-price territory with the 1966 Fury VIP, a hardtop coupe and sedan offering standard 318 V-8, vinyl top, richly appointed interior, and special badging for around $3100.

VIP returned as a separate series for '67 with the same two body styles although the hardtop switched from notchback to that year's "Fast Top" styling, with a slanted backlight and very wide C-pillars that also showed up on a second Sport Fury hardtop. Pillarless Fury coupes offered the same choice of rooflines for 1968, when another mild facelift occurred.

If not exactly head-turners, late-'60s Furys gave away nothing in appearance to rival Fords and Chevys. The 1965-66 models wore conservative full-width grilles, stacked quad headlamps, minimal side decoration, and simple taillights. Sheetmetal was more sculptured for 1967-68 -- crisper yet somehow more imposing than before.

For 1969, the big Plymouths adopted the smoother, more massive "fuselage styling" then in vogue at Chrysler. Beltlines were higher, which made windows shallower, and lower-body contours were more flowing and heavier-looking. Squarish fenderlines were links with the past, but headlamps reverted to horizontal pairs.

Model offerings again stood pat, with non­wagon styles on an inch-longer 120-inch wheelbase. Plymouth's big ragtops were now fast-waning sellers. The Fury III saw only 4129 copies for '69, the Sport fury a mere 1579. The latter then disappeared, leaving the bench-seat job as Plymouth's last big convertible; only 1952 of the 1970 models were built.