Plymouth in the 1930s: PF Standard and PE DeLuxe 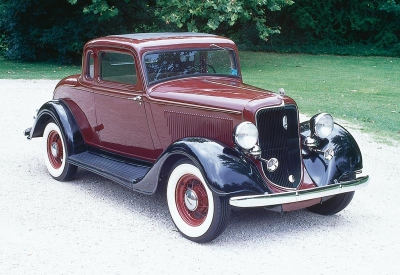 In 1934, Plymouth models like this coupe saw smoother styling and some mechanical upgrades.

Styling was smoother still for 1934, when Plymouth made its aforementioned moves to independent front suspension and a larger six. Offerings grouped into PF Standard and PE DeLuxe, the latter on a still-longer 114-inch wheelbase.

The winged-lady mascot was replaced by an image of the ship Mayflower, reminding buyers of the Plymouth Rock connection.

Though a factory Plymouth station wagon wouldn't arrive until 1938, U.S. Body & Forge of Tell City, Indiana, built wagon bodies on modified 1934 Plymouth Standard chassis. The resulting West­chester Suburban was a four-door model made mostly of wood from the cowl back; it thus demanded lots of upkeep. Only 119 were built that year. On August 10, Chrysler built its one-millionth Plymouth, and Walter Chrysler was pleased by even higher model-year volume of over 321,000.

Lumpy but modern "potato" streamlining identified the fully redesigned 1935 PJ Plymouths, which included new "trunkback" two- and four-door Touring sedans with integral luggage compartments. Standard and DeLuxe continued, but now shared a single 113-inch wheelbase. The one exception was the new DeLuxe Traveler, a five-passenger four-door sedan on its own 128-inch chassis. Only 77 were sold that year.

Despite relatively few changes, the 1936 Plymouths broke the half-million mark, a first for the make. The long chassis was trimmed three inches between wheel centers, and the Standard line was prosaically retitled Business. The main styling distinction was a fulsome barrellike radiator with thin vertical bars.

Crank-open windshields were in their final year, but 1937 was the first time Plymouth prices exceeded $1000. That applied to a new seven-seat DeLuxe limousine, which shared a long wheelbase, stretched seven inches from '36, with a similar sedan. Other models lost an inch between wheel centers.

Styling became dumpy for 10th Anniversary 1938; a near-oval radiator didn't help. Models and specifications were mostly carryovers, though there were some changes. For example, a high-compression head was newly optional, lifting bhp to 86, up four from standard. Also available, as it had been since 1936, was a low-compression 65-bhp "economy" engine, a no-charge lure offered to Depression-weary buyers.

On the model front, the Business line became the Roadking in March 1938, but was no less spartan for it. A four-door DeLuxe station wagon, the Suburban, bowed as Plymouth's first such "catalog" model, though U.S. Body & Forge built its coachwork, as it had done back in '34. Like some other contemporary wagons, this came with front-door glass only; glazing behind cost extra. There was no rear bumper either, but a tailgate-mounted spare tire provided some protection.