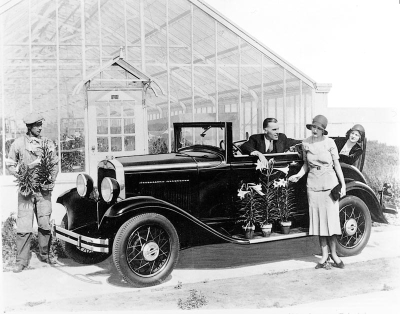 Cars like this 1930 Plymouth convertible helped the company prosper through the depression.

When Walter P. Chrysler decided to launch a low-priced car in 1928, his sales manager, Joseph W. Frazer, suggested the name Plymouth, after the storied Massachusetts rock where the Pilgrims landed.

WPC wasn't sure people would make that connection, so Frazer mentioned another product well known to the ex-farmboy. That was all Chrysler needed. "Every god damn farmer in America's heard of Plymouth Binder Twine," he replied -- so Plymouth it was.

Plymouth was a success from day one. Though it was first sold only through Chrysler dealers, demand was so strong that franchises were extended to Dodge and DeSoto agents by 1930.

The strategy excellent and it vastly increased the number of Plymouth dealers while insulating them from the Depression-era sales reversals suffered by costlier Chrysler makes.

Yet despite those "hard times" -- or perhaps because of them -- Plymouth prospered in the '30s on a formidable combination of low price, attractive styling, and engineering often more advanced than that of Ford or Chevrolet. Though Plymouth never outproduced those rivals, it was firmly established as America's number-three seller as early as 1932, a spot it would hold well into the '50s.

Many key features figured in this meteoric rise: all-steel construction (per Chrysler practice) in an age of wood-framed bodies; four-wheel hydraulic brakes some years before Ford and Chevy had them; "Floating Power" rubber engine mounts that gave the 1931 models "the smoothness of an eight and the economy of a four"; independent coil-spring front suspension for 1934, again beating Ford (and matching Chevrolet); rubber body isolators (1936); standard safety glass, recessed controls, concealed heater blower and defroster vents (1937).

Reflecting these and other pluses, Plymouth was one of the few makes to score higher production in 1930-31 than in the pre-Depression period. It also gained in 1933, one of the roughest industry years on record. Output peaked at nearly 552,000 for 1937, dropped to about 279,000 for recession-year 1938, then recovered beyond the half-million mark by 1941.

Plymouth responded in May 1931 with a car that was genuinely new, the fruit of a $2.5-million development program. Designated PA, it kept to the same wheelbase but boasted "Floating Power," as mentioned, plus eight more horses to go with it.

There was also a broader lineup with a dashing new sport phaeton and rumble-seat roadster. But mindful of the Depression, Plymouth also fielded two cheap "Thrift" sedans at $495 and $575. Despite the general economic gloom, model-year production soared to nearly 107,000.

Bowing in February 1932 was the last four-cylinder domestic Plymouth for the next 46 years. Styling wasn't greatly altered, but the new PB was more expansive on a three-inch longer standard wheelbase. A convertible sedan was added, Chrysler evidently feeling confident enough to dabble with less-popular body styles even in its price-leader line.

Also new was a seven-seat sedan on a 121-inch chassis. That model found only 2200 buyers and was duly dropped -- but not for long. Horsepower kept climbing, reaching 65, but prices stayed put. Sales fell sharply in this first year of Ford's milestone V-8, but were still respectable at just under 84,000.

Plymouth offered better value by switching to a six for 1933. The project cost $9 million, but was worth every penny in extra sales, which leaped beyond 298,000 for the model year. No wonder, for the new Six sold for as little as $445, over $300 less than the original 1928 Four.

Like other makes, Plymouth continued "splitting" model years by offering two 1933 series. The first, titled PC, was built from October 1932 through March 1933 in five models on a 107-inch wheelbase. Then came a two-series PD line of standard and DeLuxe Sixes on respective wheelbases of 108 and 112 inches. A convertible coupe was exclusive to DeLuxe.