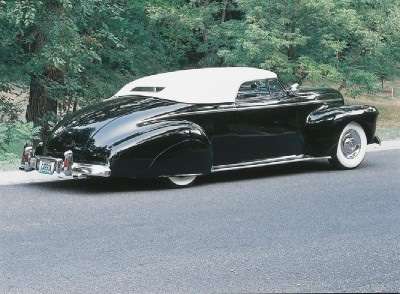 By the mid 1950s, customizers were gravitating toward new cars that required less radical bodywork to turn heads, but well-executed earlier-model customs still retained their appeal with many enthusiasts.

The Pisano/Ogden Buick, originally built by drag racing brothers Tony and Joe Pisano in the early 1950s, held its own against the chopped 1949-51 Mercurys and modified late ­models that were on customizing's leading edge.

The focal point of this former 1941 Buick convertible is the five-inch-chopped windshield and Carson top by Gaylord's Upholstery. The Carson top is so named since the design originated at the Carson Top Shop, but the term was soon applied to any custom-made lift-off top that mimicked the original Carson top design.

Carson tops gave a much more rakish profile than the stock convertible tops and their bulky folding mechanisms could achieve.

Other than the chop, the body modifications were subtle. The stock Buick's busy headlight trim was discarded and the headlights smoothly frenched into the front fenders. The car was nosed and decked, and the door handles, taillights, and fuel-filler door were removed.

The Pisano/Ogden, a custom 1941 Buick convertible, needed few modifications to turn a lot of heads.

A 1949 Chevy license plate guard was also fitted to the rear bumper, and twin spotlights were added to the windshield posts. Under the hood, a 331-cid Cadillac engine was installed.

By 1956, the Buick belonged to Herb Ogden, who was in the Army and stationed in Southern California. Ogden brought the car to Barris Kustom for a freshening, after which it appeared in a couple customizing magazines of the day.

The Buick migrated with Ogden back home to Virginia when he was discharged from the military in the late 1950s. Ogden sold the car in 1963, and from there the story gets fuzzy as the Buick went through several different owners.

Around 1982, enthusiast Barry Mazza discovered the Buick in the Washington, D.C., area, and acquired it in very tired condition. He performed a full restoration over the next 10 years. Barry made a few changes from the car's previous forms, but made sure the alterations would be period-correct and enhance the car's appeal.

The front bumper received a 1949 Chevy license guard and bumper guards with Lucite parking lights to match the rear. After the bodywork was finished, Tommy the Painter at Black Oak Auto Body in Wayne, New Jersey, applied the black lacquer paint.

The Buick had a big-block Chevy engine when Mazza got it, so he installed another era-correct 331-cid Cadillac engine. Bob Ecstandt stitched the black and white tuck-and-roll ­interior, and Barry had the entire dashboard chrome-plated.

Custom collector Kurt McCormick talked Mazza into selling the car in 1996, and the Buick now holds a place of honor in Kurt's collection.

The Buick was displayed at the first gathering of historic custom cars at the 2005 Pebble Beach Concours d'Elegance, where it still held its appeal 50 years after it was built by a pair of drag racing brothers.