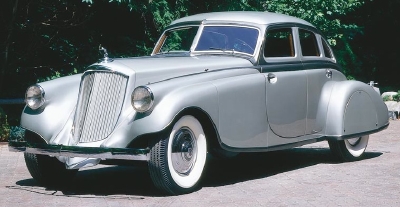 The Pierce-Arrow Silver Arrow was incredibly futuristic-looking for its time, with no running boards and bulbous "pontoon" fenders.

Test driver Ab Jenkins took to the Bonneville Salt Flats in September 1932 with a stripped 452 V-12 roadster prototype that had already done 33,000 miles. It promptly ran 2710 miles in 24 hours at an average speed of 112.91 mph. Jenkins commented: "The car was stable at all speeds, more like a racing chassis." The car was stable enough that Jenkins could write notes to spectators and toss them out at speeds over 110.

No mechanical problems were experienced during the run. Fenders, windshield, and other road equipment reinstalled for the 2000 mile drive back to Buffalo -- a convincing demonstration of Pierce-Arrow stamina.

Jenkins returned to Utah in 1933 with a modified 207-bhp car that set 79 world speed records over 251/2 hours, running as high as 128 mph. The road and weather conditions were more-difficult than the first trip, but neither car nor driver seemed to mind. Ab managed to shave during the final laps.

But speed records, multicylinder engines, and high-priced luxury were not enough to survive "hard times," as Cadillac, Marmon, Packard, and Stutz were learning. Pierce had grossly underestimated both the depth and breadth of the Depression, just like its Studebaker owner.

Extensive advertising didn't help. By 1933, both firms were dangerously overextended, yet Studebaker continued pumping money into Pierce-Arrow. The two companies soon agreed to standardize several manufacturing processes for their vastly dissimilar cars, but this didn't save much money. Still, Pierce was able to reduce some operating costs in light of its fast-dwindling sales.

Late 1932 brought a new sales manager in Roy Faulkner, the dynamic former president of Auburn, which lent credence to rumors of an impending Pierce/Auburn merger. One of his first acts was the revolutionary Silver Arrow that was displayed at the 1933 Chicago World Fair. Designed by Phil Wright, it was the product of numerous wind-tunnel tests yet a striking aesthetic success. Said company literature: "It gives you in 1933 the car of 1940."

Actually, the Silver Arrow wasn't a literal forecast of future Pierce styling, but it was truly futuristic. A four-door sedan on the 139-inch chassis of the model 1236, it bore a ­handsomely Vee'd radiator flanked by Pierce's trademark faired-in headlamps now fully integrated with flush-sided fenders. Running boards were absent, and pronounced pontoon rear fenders set off a radically tapered "beetle back" with a narrow Vee'd slit for a rear window.

Pierce claimed the Silver Arrow capable of 115 mph, but with over 5700 pounds of heft, even the 175-bhp V12 would be hard pressed to get much over 100. At an announced $10,000 (Faulker evidently planned limited regular sales) this dream car would remain just that for most, and only five were built.

Faulkner, the Silver Arrow, and Jenkin's speed runs briefly lifted Pierce fortunes in early 1933. Twelve-cylinder sales were up by 200 percent in January and by 130 percent in February; even through October they ran 55 percent ahead of the previous year's pace. But this recovery was dashed by strikes at tool-and-die makers, and Pierce lost 300-400 orders late in the year. As a result, production rose only slightly to 2295.

Worse, Studebaker went bankrupt in the spring of 1933, leading Erskine to commit suicide that July. Studebaker's receivers ordered Pierce to be sold, so in August the firm passed to a group of Buffalo-area businessmen and bankers who paid $1 million for a chance to turn things around. Faulkner returned to Indiana.

With this, Pierce-Arrow was independent again and, ironically, healthier than Studebaker. With debts canceled, the new owners hoped to break even at 3000 annual sales and to make $1 million at 4000. To achieve that they installed Chanter as president, who began planning for higher volume.